A BRITISH property buyer was hospitalised on Monday after allegedly being badly beaten by the Cyprus property developers with whom he is in dispute, his lawyer said yesterday.

Conor O’Dwyer, 38, who has widely publicised his case on YouTube and on the website lyingbuilder.com, was kicked in the kidneys and had his head stomped on, according to his lawyer Yiannos Georgiades. 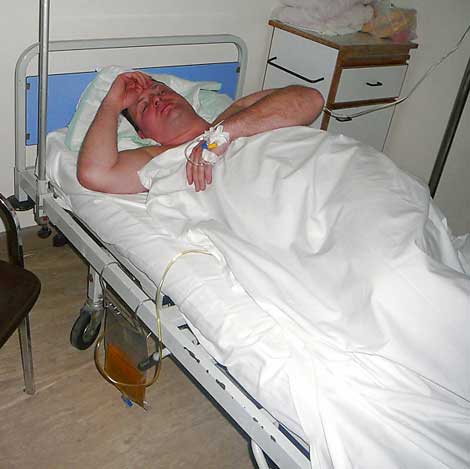 O’Dwyer had already pressed charges over another alleged beating by the father and son developers in March 2006 while fighting his ongoing property case at court. They were later charged over the assault.

According to Georgiades, on Monday at around 11am O’Dwyer went to the disputed property in the Famagusta district to take pictures of changes to the area around the house to produce as evidence in the land wrangle.

“He thought the photos might prove important later,” said Georgiades.

Upon his arrival, the woman to whom the developers re-sold the house after unilaterally cancelling O’Dwyer’s contract and keeping £75,000 of his money, allegedly “made a phone call” and two men appeared shortly afterwards that O’Dwyer identified as the developers.

“Conor was forced out of his car. One stepped on his head and the other kicked him in the kidneys,” said Georgiades, adding that they also took his camera.

“He was bleeding and there was a crowd of mostly women screaming and shouting for them to stop. He was crying out for help and no one helped him.”

Georgiades said someone eventually called 112 and police showed up with an ambulance. A British woman also took pictures of what was going on, he said.

O’Dwyer was taken to Paralimni hospital and from there sent to Larnaca.

“He has head injuries, external bruising, internal pain in the kidney region and he is badly shaken,” said Georgiades.

Doctors decided to keep him in until today to run tests and X-rays.

Georgiades said he had spoken to police about the incident. “They said they were investigating the ‘accident’,” said Georgiades. “I told them it wasn’t an accident. They didn’t arrest anyone but they did take statements.”

Georgiades said he spoke yesterday with a senior officer at Famagusta CID who said they were dealing with the case. O’Dwyer gave a statement to police yesterday afternoon from his hospital bed.

The senior officer dealing with the case, George Economou, told the Cyprus Mail yesterday police would take statements from all concerned and decide if there was a case to press charges.

“Conor is just giving his statement now,” said Economou. Asked if there would be any arrests, he said he would know more today. “It depends on the investigation,” he said.

Georgiades said he has also informed the British High Commission.

With regard to the previous assault case against the developers, Georgiades said the charges had been dropped by the Attorney-general ostensibly because O’Dwyer had not shown up for a hearing.

But the lawyer said when the last hearing was due, O’Dwyer, who lives in the UK, had been told by prosecutors not to bother coming to Cyprus because the hearing would likely be adjourned.

“He didn’t come and on the day of the court case, the prosecutor said the judge wouldn’t give an adjournment so the proceedings against the two men would be stayed“.

O’Dwyer is now entering the third year of his property saga.

He and his wife were going to buy a house on a development in Frenaros village. However when they viewed the construction area when the project was coming along, they realised the surrounding homes were not those specified in the original plan.

This would have resulted in a total lack of privacy as two balconies on other properties would have been looking into their garden. O’Dwyer has said the reason they had chosen the site in the first place was for the privacy that was promised.

After several run-ins with the developers over the changes to the surrounding area, and although the house is registered to them at the Land Registry given they had paid for most of it, the O’Dwyers subsequently discovered that the developers had sold it to another British family, who now reside there. The O’Dwyers have not received their money back.

When O’Dwyer launched his story on YouTube video, backed up by documents and taped conversations with the developers and their lawyers, Interior Minister Christos Patsalides ordered an investigation in August last year, but no results have been forthcoming.

A property boundary dispute normally arises between registered owners when ownership of a section of a common boundary or an entire common boundary is contested. Although the Department of Lands & Surveys in Cyprus retains all relevant immovable property information/records including title registrations and mappings indicating the legal ownership of property boundaries in Cyprus, boundary disputes nevertheless do occur, usually resulting in possible asset value depletion and an adverse financial impact. In accordance with Law Cap.224, Section 58, an application needs to be made to the Director of the Department of Lands & Surveys to carry out a local inspection of the property boundary and to make a final decision to resolve the dispute. The Department of Lands & Surveys' requirements for the settlement of the boundary dispute is that for one of the neighbouring properties to hold a title (developed on a plan drafted by the Director of Lands and Surveys) and that the dispute in question should not have...
Read more
Legal Matters

Peyia is mulling what steps to take after losing a court case to block the development of a hillside above the Paphos town. The local municipality had challenged the government's decision to issue a planning permit for a massive development at Ayia Vouni (Sacred Mountain), a hillside that overlooks Peyia, saying that it would irreversibly damage the environment, put pressure on infrastructure and create new homes whilst thousands remain empty. "We are looking into a possible appeal. We have 42 days from December 14, 2020, when the ruling was made, and I can't believe the outcome," Peyia councillor, Linda Leblanc told the Cyprus Mail. "I didn't see what papers were submitted by Peyia or what documents were given to the lawyer, but in my opinion, it should not have been dismissed by the judge as there is ample evidence on the two main points that are required." Planning permission for the project was granted on July 28. Although the project is being pitched as...
Read more
News

Our top 10 property stories for 2020 are set against a background of the COVID-19 pandemic, which has plunged our planet into a health and humanitarian crisis, resulting in disruptions to businesses and livelihoods, and restrictions on our personal freedoms. Cyprus Property News has not been immune to the impact of the pandemic. Our visitor numbers have fallen to just over 500,000; a 30% fall compared to last year. As we approach the festive season, which will be unlike any we've experienced in the past, here are the top 10 stories that have attracted the most interest from you, our readers, over the past 12 months: Number 1: Historic collapse of property sales - News that the COVID-19 pandemic had put the island's real estate market into deep freeze, with the number of sales falling by 80% in April compared to April 2019. By the end of November sales had recovered and are now down 24% compared to last year. Number 2: Cyprus sold...
Read more