“I CAN’T let my kids see me like this,” says Conor O’Dwyer, the British home buyer beaten up in Frenaros village last Monday, when asked whether he plans to return to the UK as soon as he leaves hospital.

O’Dwyer was assaulted while gathering evidence for the two-year legal dispute he is in with his Cyprus property developers.

A father and son have been in police custody since Thursday after O’Dwyer, 38, ended up in hospital. He was still there on Friday and worried about what would happen next.

“Am I afraid? I am absolutely afraid,” he told the Sunday Mail. 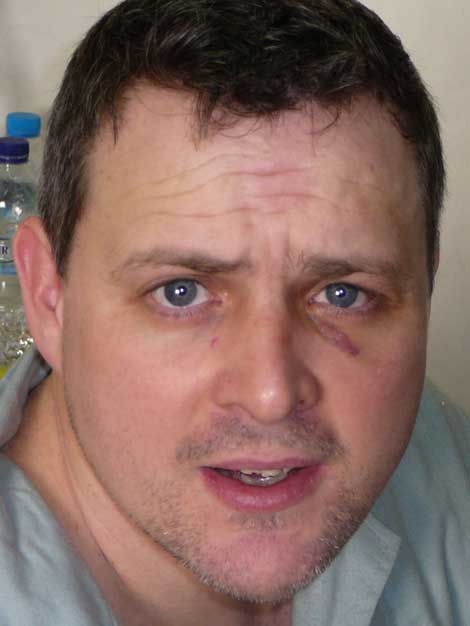 “It’s been absolutely horrendous but they are now in custody and I would rather it was extended until I leave the island.”

The British ex-soldier said he is determined not to go back to the UK until he sees the case through and he didn’t want his children to see him in such a state.

On Friday, five days after the attack, O’Dwyer was still unable to walk properly and said he felt a stabbing pain in the kidney area. “I’m still dragging my right leg,” he said.

Whatever his dispute with the developers, which is pending before the courts, O’Dwyer was not looking for the kind of trouble that befell him when he went to Frenaos village on Monday.

He certainly never expected to end up in hospital for a week.

He had gone there to take some pictures and measurements around the disputed property to help his two-year-old legal case, which he has outlined in minute detail on his website lyingbuilder.com and on the YouTube Internet video channel.

“I had a friend with me, an ex-marine, in a separate car and he was some 200 metres away on a dirt track in a field. He had two cameras, a helmet one and a camcorder with a 200 metre lens,” said O’Dwyer.

The two men had fixed a rendezvous point in case things did go wrong.

O’Dwyer said he then had a brief conversation with the woman who now lives in the house. “I said who I was and that I was gathering evidence. I was on the road and not the pavement. I took pictures and measurements,” he added. “It’s been two years since I viewed my house. I’ve been respectful up to now.”

He said all a sudden one of the arrested suspects – the father – blocked his friend’s path with his 4×4 and started shouting angrily.

“My friend did up the window and got on the phone to me. I told him we would call the whole thing off and I would come to him where he was. We didn’t want any trouble at all. But he was trapped there,” said O’Dwyer.

He himself then left the area to head for the rendezvous point, and was heading down towards the centre of Frenaros.

“Suddenly there was a car in front of me. I went to turn left and all of a sudden there was the son coming across the junction. It was a deliberate ramming and I will always remember his face as our cars crashed.”

O’Dwyer said there was also another man in the car.

“I turned off the engine and opened the door. He put out his hands to grab me and the first punch came in my eyes and nose,” said O’Dwyer.

“I staggered to the steps of the cafe pub and my nose was bleeding. I was wearing a button camera, which is no bigger than a cigarette packet and was sewn into my clothes.

“The son was then behind me and he wouldn’t let me get up. His father then showed up. He dropped his cigar and put his fist in my face. They then noticed the wire that had been attached to the camera and he shouted “camera, camera, camera”. They tried to grab it and I ran four metres or so and dropped into a foetal position clutching it and then the kicks to the back came. They rolled me over and the father kicked my head and ground his foot into my skull applying pressure.”

O’Dwyer said he was calling for help at the busiest junction in Frenaros but no one came to help.

“I held on as long as I could but the camera was ripped from me. They then went off,” he said. He said police have since recovered the camera but the SIM card with the data was missing.

Police then arrived and he asked the officer to help him retrieve his camera because the incident had been filmed.

“He didn’t want to know, and then I saw the camera disappear to the third individual,” said O’Dwyer.

He remembered that he had a digital camera in the boot of his car and managed to retrieve it and took some snaps of the eyewitnesses. The card from that camera went to the police so they could take statements from the people who were there.

By then an ambulance had arrived and O’Dwyer was taken to Paralimni hospital, and from there to Larnaca, from where he called his lawyer.

He did manage to find some humour in the situation when during his first day in hospital he was served with a summons after the developers filed suit against him over his website.

“They obviously sent the court server to the hospital because they were the only ones who knew where I was,” he said.

“My blood pressure was up and I signed the papers with my hand that was connected to a drip.” O’Dwyer is not concerned about the defamation suit because he said the developers had tried it before and the case was thrown out of court.

But the whole business has left O’Dwyer badly shaken, particularly as it was the second time he was attacked. The two developers were also charged with assaulting him in March 2006 but the charges were dropped.

“It’s not a reflection on all Cypriot developers but something must be done about these people. They assaulted me because they thought they got away with it the first time,” said O’Dwyer.

“I was scared, terrified. It was the second assault and the government had done nothing about my case. Maybe it needed to get worse before it gets better,” he said.

O’Dwyer had already gone to the police in the UK to secure a permit to demonstrate outside the Cyprus High Commission.

“If this trip bears no fruit that is my only option left,” he said.

The Cyprus citizenship by investment programme, which enables well-heeled foreigners to obtain an EU passport for investments of at least €2 million, has come under fire again from the European Union.
Read more

The Cyprus citizenship by investment programme, which enables well-heeled foreigners to obtain an EU passport for investments of at least €2 million, has come under fire again from the European Union.
Read more

Newspaper is your news, entertainment, music fashion website. We provide you with the latest breaking news and videos straight from the entertainment industry.