A LETTER in the Cyprus Mail tells the story of a Brit who moved to Cyprus and bought a newly-built house. The property looked impressive, but after a year or two it had serious damp problems and a number of alarming cracks appeared.

A neighbour was a former builder who had seen the house being built. He said the foundations were hopelessly inadequate, particularly as the land had previously been an orchard and the soil was unstable.

Unfortunately jerry-built property is quite commonly seen in Cyprus. Often lacking any form of damp-proofing, the moisture absorbing concrete skeleton acts like a wick drawing moisture out of the soil into the structure of the building. This results in damp, cold and musty properties and may lead to structural problems in the longer term. Without adequate damp-proofing, timber-frame properties can suffer even greater problems!

And as in the case of Brit mentioned in the letter, some properties are built with inadequate foundations. The visible symptoms are uneven floors, cracks in walls, floors and wall tiles and jamming doors and windows. The more sinister, invisible, symptoms are damaged water pipes and possible structural instability.

The four photographs below illustrate what can happen if your luxury home has been built on inadequate foundations – click on any of them to see a larger image. 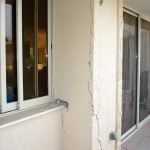 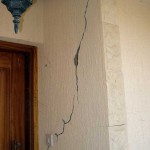 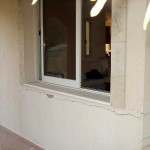 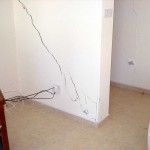 What many people fail to appreciate is that in Cyprus there is a lifetime warranty on the structural integrity and stability of a building. It is possible to pursue the developer who constructed the building through the courts although the onus is on the buyer to prove that the problem is due to his poor workmanship, materials, etc.

Click here for further information regarding ‘structural’ and ‘routine’ defects.

A property boundary dispute normally arises between registered owners when ownership of a section of a common boundary or an entire common boundary is contested. Although the Department of Lands & Surveys in Cyprus retains all relevant immovable property information/records including title registrations and mappings indicating the legal ownership of property boundaries in Cyprus, boundary disputes nevertheless do occur, usually resulting in possible asset value depletion and an adverse financial impact. In accordance with Law Cap.224, Section 58, an application needs to be made to the Director of the Department of Lands & Surveys to carry out a local inspection of the property boundary and to make a final decision to resolve the dispute. The Department of Lands & Surveys' requirements for the settlement of the boundary dispute is that for one of the neighbouring properties to hold a title (developed on a plan drafted by the Director of Lands and Surveys) and that the dispute in question should not have...
Read more
Property Statistics

Larnaca based property developer Stelios Georgiou Property Limited has been fined €70,000 by the Cyprus Consumer Protection Service (CCPS) for breaching the Unfair Commercial Practices law of 2007. Although we've reported similar cases in the past, we believe this one is the first of its kind as it relates to an assignment contract. An assignment contract is one in which the first purchaser of a property sells it to a second purchaser before the property's Title Deed is issued. The assignment contract transfers all the rights and obligations contained in the first purchaser's contract to the second purchaser. (Assignment contracts were introduced as part of a revised Specific Performance law that came into force in 2011. It overcame a long-standing problem whereby unscrupulous property developers demanded money from their customers who wished to sell thee property they purchased before its Title Deed was issued.) In this particular case the complainants were the original purchaser and her daughter to whom the assignment was made....
Read more