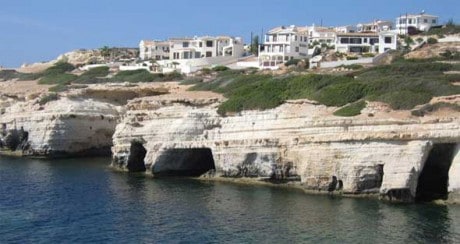 Sea caves at Peyia near Paphos

DEVELOPERS using heavy machinery to cut into the coastal rock formations are destroying the area of the sea caves at Peyia in Paphos.

On Friday, residents of the area complained to local councillor Linda Leblanc, that a developer was bulldozing the seafront near the sea caves.

As well as causing irreparable damage to the rock formations, they have also laid large pipes to discharge waste into the sea

Andreas Evlavis, the Paphos district secretary of the Green Party suspects the developers might have known they were in the wrong. “The developers have caused a huge amount of damage. When they realised they had been spotted, the driver of the vehicle ran away.”

Evlavis said the destruction was the work of a single developer and that the area was protected.

“Immediate action must be taken. The Interior Minister needs to look at the case,” he said.

The Paphos District Office representative for beaches, Andreas Charalambous, was equally upset. “I have been to see this problem for myself and it’s terrible. These people have made a path and small harbour for themselves. The sea is for everyone and this action is illegal. “I can assure you that this whole area will be brought back to how it was before parts were destroyed.” He added: “I’m sure that these people will be taken to court.”

Peyia mayor Neophytos Akourshiotis gave his own assurances. “The coastal area and the sea caves will be protected.”

At the same time he expressed his wish to continue with efforts to establish a coastal walkway from Coral Bay to Saint Georges.

According to Leblanc, similar occurrences have taken place before in the same area and there is an existing case in courts.

Leblanc, who visited the area on Friday and again yesterday morning told the Cyprus Mail, “The work is an intrusion into the coastline. There is a house under construction, which is quite far back from the sea, but where the plot ends and the protected zone starts is difficult to fathom. This construction work is on the cliff’s edge next to the sea. I realise this happened a lot in years gone by but now officials must be more careful to distinguish areas and verify them.”

According to Leblanc, the area has been bulldozed solely to provide access to the sea.

The house next door to the construction plot also seems to be in violation of regulations, as they have built a pathway to the sea, complete with their own sea wall.

Leblanc pointed out that the mayor of Peyia was aware of the situation and that she had discussed the matter him recently. “There is very little law enforcement regarding such matters in Cyprus and it appears as if developers and owners seem to think they can do whatever they want,” she said.

The practice of bulldozing the coastline is illegal and prohibited everywhere in Europe.

“The law here seems to be weak,” she said,”this is a national protected zone, I think the district office will have a case for court with this“.

According to the councillor, the damage is irreparable and appears to cross over the area of the proposed public pathway.

This is part of a bigger scheme, with the aim of creating a long pedestrian path from Paphos airport to Saint Georges in Peyia.

Leblanc said the neighbours of the building plot are very upset and added that developers and private owners’ awareness needs to be raised. “We must be stricter with the developers and check wording of documents. We can no longer take for granted that they won’t intrude beyond their land.”

Leblanc was sceptical about the potential for action. “Are fines really a solution – and will it be a deterrent to others considering doing the same thing? The problem is there is a weakness of enforcement of legislation in Cyprus.”