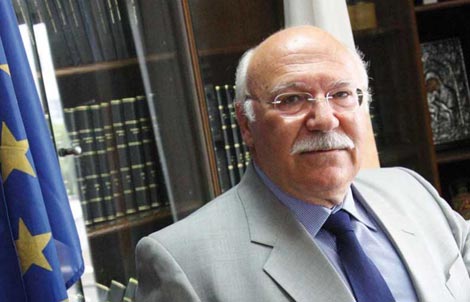 IN COMMON with many people who have contacted me, Gavin Jones has considerable difficulties in getting an answer to a complaint he has lodged with the Disciplinary Board of Advocates. (You may also find the article by Antonis Louizou entitled ‘Well meaning or crooked lawyers’ interesting).

IN JUNE this year, you were interviewed by the Sunday Mail and were quoted as saying that ‘my only goal is to leave this post and have a good name, nothing more‘. In order to assist you in achieving this ambition, I would ask you to consider some serious issues which may well prevent you from realising your objective, together with some suggestions for removing these constraints.

I should, however, declare that I have a number of grievances with the justice system in Cyprus that are but examples of a generic malaise of which countless others are also casualties.

Twelve months ago almost to the day, I sent you, in your role as President of the Disciplinary Board of Advocates, all the corroborative evidence that would have enabled the Board to seriously consider striking off, fining and launching criminal proceedings for gross malpractice and fraud against the lawyer of my late Cypriot mother. Despite my original letter, follow-up correspondence and telephone calls, I have heard nothing.

It would appear that the Disciplinary Board has chosen to ignore the detailed evidence laid before it and has allowed a member of the Cyprus Bar Association to continue practicing.

Does the Disciplinary Board have any intention of ever addressing the fact that my deceased mother’s lawyer submitted false affidavits to the court without a death certificate and eliminated me as an executor of her will?

He also stated that he couldn’t locate me and that she’d died in England in 1998 when in reality she died in Paphos in 2007. Will there be an investigation as to how Paphos District Court authorised this lawyer to obtain ‘legal’ control over my mother’s affairs without demanding sight of a death certificate which would have proved conclusively that his affidavits were fraudulent?

Will I be recompensed for the inconvenience of having to obtain legal advice, return to court, remove my mother’s lawyer as sole executor and have myself reinstated as executor?

Are we to believe that the Disciplinary Board doesn’t take its duties seriously enough and is so overloaded with complaints that it is unable to process these within a reasonable timescale?

The Board presides over a body of barely 2,000 members and yet it has taken 52 weeks and no resolution to my case has been forthcoming.

Some would say that my mother’s and other lawyers who have been cited for fraudulent and negligent behaviour may well have powerful and influential allies. I’d like to think that this isn’t the case but inaction naturally invites such speculation.

As the Board gives the impression of acting in the best interests of its members rather than protecting their clients and the public, it suggests that this reticence to speedily confront fraud head-on within the profession has become institutionalised

You and your Board members may be unaware of the general consensus that a great many Cypriot lawyers are considered self-serving and untrustworthy pariahs and that their professional body, the Cyprus Bar Association, puts their interests firmly above those of the public.

This cosy modus operandi might have been the norm and considered acceptable when Nicosia, Limassol and Paphos were nothing more than oversized villages. In those days our ancestors ‘fixed’ situations with impunity. But times have changed and standards and expectations have risen

If you wish to leave the post of Attorney General with ‘a good name, nothing more’, the Disciplinary Board of Advocates and the Cyprus Bar Association should take a good look at themselves and make the necessary changes so that they’re seen to be part of the solution and not part of the problem.

An avalanche of questions is being raised in the European Parliament about many negative aspects of the administration and delivery of justice here.

The choices are clear-cut. The current judicial regime can remain untouched or else reforms can be introduced which will inject some extra credibility into the legal system to ensure that justice is done and seen to be done.

As a reformist, you will most certainly leave the post of Attorney General with ‘a good name’. I therefore urge you and your colleagues to make the right choice.

I look forward to hearing from you.

The Cyprus government is trying to expedite a resolution to the Title Deeds-cum-fraud mess in which people were duped into buying property built on land that the developer had earlier mortgaged to the bank.
Read more
Legal Matters

Sascha Morris, who sold off-plan properties to Cyprus property investors, has been convicted of fraud at the Leeds Crown Court following a prosecution by the CPS Specialist Fraud Division.
Read more
News

The court will issue its judgement in the case against Theodoros Aristodemou, the founder of Aristo developers and former chairman of the Bank of Cyprus, and three others on July 28.
Read more