Owners kept in the dark over the future of their homes 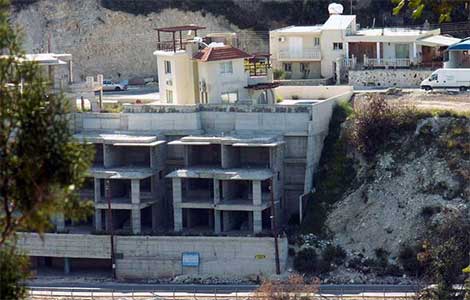 FRUSTRATED owners of properties which appear to be sliding down a hillside in Paphos say they are being left in the dark over the future of their homes and fear they may be demolished.

A large crack appeared in the road below the development in April, which is a busy hub for traffic to and from Kamares village.

The road was closed by the police and owners of the stricken properties were told it was unsafe for them to stay there.

The Paphos development, built by Tremetoushiotis developers Ltd under the umbrella of Top Properties consists of 14 units: four apartments, two villas and eight townhouses, which are at a skeleton stage and face directly onto the busy road. Only four of the properties have been sold and all of them to British buyers.

Les and Christine Payne, aged 59 and 53 years respectively, bought their ‘dream home’ off plan from Top properties over five years ago. They received the keys two years ago and ‘spent a fortune’ on furnishings, air conditioning and other items for their new home.

Today the disillusioned pair, say they have been left in the dark over the future of their two-bed, two-bathroom home.

“We don’t know what’s going to happen to our investment,” said Les, “we keep asking and asking but nobody seems to give us any answers. We paid cash and remortgaged our house in the UK to fund purchasing our apartment in Tala.”

The pair bought their home for 79,000 CY pounds, but say the final cost was more due to the currency changeover to the Euro. The property was their ‘retirement’ and they were planning to move into it permanently in a couple of years.

Those dreams now appear to have been thwarted, and the ongoing problems with their Cyprus home have caused Christine to suffer from depression and stress, for which she is receiving medical treatment.

“I have been off work for about six weeks and I don’t know when I will be going back,” she revealed.

The couple, who live in the UK, managed to enjoy only a handful of holidays in their new apartment before it was deemed ‘unsafe’.

Les said, “We are staying in Tala in an apartment which we have had to rent for the period of our stay. We are here to clear all of the furniture out of the apartment and it will go into storage, which is something else that we will have to pay for.”

The Paynes say they believe that there is a disagreement between Top properties and the authorities.

“The developer is saying they shouldn’t have given him building permission if they knew the land was unstable, but the authorities say he should’ve done all of his surveys properly before he started to build, but we are only going on what we have been told,” Les explained.

The buildings at the top of the development have all experienced movement and, according to the Paynes, there is also now movement in the townhouses directly facing the road.

The pair originally heard of the problem via an email forwarded by their next-door neighbours, who said a managing agent had told them “that the Kamares road had been closed”.

“This was end of March this year, not long before we were due to come on holiday and we were told that we couldn’t stay in the apartments”.

The Paynes say that Top Properties initially said the movement in the foundations was caused by an earthquake, but the couple found out that, while there had indeed been a slight tremor the true cause of the problem “was … the heavy rains”.

The municipality engineer who accompanied the couple to the site, noted Les, “reckons there’s not enough drainage and because there are three retaining walls at the site, when it rains it just takes everything away”.

The distraught pair say they were promised monthly updates from the developer, but that none has been forthcoming.

“The only way we get a response is if we get in touch with them and even then they don’t tell us anything as such … We need to know if the problem can be rectified or if it’s going to be demolished, maybe without us knowing anything about it,” stressed Les.

Meanwhile, huge gaping cracks are apparent around the construction and the Paynes say their building has dropped by at least two feet.

“We contacted the developers during this trip, but they couldn’t tell us anything.

They offered us an appointment but we declined, as every time we’ve come here we’ve struggled to get an appointment and we are told the same things,” said Christine.

The Paynes say they have no other course of action open to them other than retaining a lawyer.

Meanwhile, Paphos municipality building permits office head Evagoros Andreou stressed: “we are aware of the situation and are dealing with it”.

He added that they were waiting for the Interior Ministry to approve the formation of a specialist ‘ad hoc’ committee – hopefully within the next couple of months – consisting of “members from ETEK and other bodies to examine the situation.”

“They will make suggestions as to whether the site should be repaired or demolished.

The situation will be handled with care and in accordance with the law. This is a very complicated case”.

“I believe the developer has said he has no money available to undertake repairs,” a representative for the local engineers who wished to remain anonymous noted.

“It’s now up to the Paphos district office to force the developer to do something to secure the neighbourhood. In addition, something must be done to drain water away from the building.

Some ideas may include constructing supports down to the road at the base of the building. I’m sure that court action will be taken if necessary.”

Declining to answer questions posed by the Mail, a spokesperson for Top Properties who did not wish to be named, noted: “It’s an ongoing situation and we have spoken to the clients individually and are in constant contact with them.

We are waiting for a decision from the authorities as to what to do.”

Paphos is in for a facelift with its fair share of new developments while getting smarter with digital projects worth tens of millions of euros nearing completion or in the making.
Read more
News

The Greens have hit out at a "scandal brewing in Paphos", with roots in the past, concerning land earmarked for green areas, which the developer wants to sell to the Bank of Cyprus to clear debts.
Read more
Property Statistics