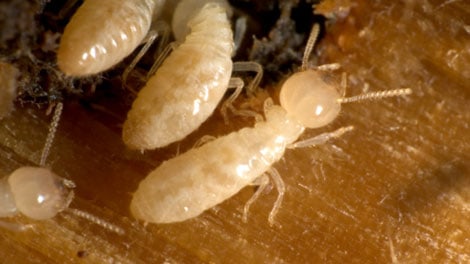 THINK OF termites and you might well think of American cartoon houses being consumed by swarms of roving dots, and you might be forgiven for thinking it is a uniquely American problem.

In fact, termites (and other wood eating pests) are a growing problem in Cyprus, with hundreds of home-owners in both rural and urban areas reporting infestations by native tiny wood eating insects each year.

According to pest control firms, the tiny, maggot-like beasties (they lose their wings after finding a place to nest) are routinely entering houses to feed on window frames, door frames and cupboards, before returning to a nearby subterranean colony, or simply taking up residence in the wood itself.

In one Nicosia resident’s case, an untreated infestation led to all the door frames and even chunks of wooden floorboard being eaten away, costing over €1,000 in treatments and taking three months to fix.

“We had to remove all of the wooden door and window frames,” Vassiliki Anamigo told the Sunday Mail this week. “The builders had to take them out and burn them.”

And while it is a costly nuisance for many modern home-owners, for those whose houses have wooden supports, an infestation could eventually bring down the building. Those with older houses fare even worse, as termites have shown themselves able to reach the second or third storeys of buildings.

Tackling the problem is expensive. With no DIY termite treatments on the market in Cyprus, home owners have to call in the professionals, who can charge anything from €500 to €2,200 to kill off the colony.

They do this by injecting a toxic chemical into several wooden areas or into the ground around the home. This does not automatically kill the termites – instead they collect traces of the chemical that are taken back to the colony. Over the course of a few days, this chemical will kill the colony.

N&G Pest Control’s Nicos Erakleous, which offers this service throughout the island from around €500 for an average home, said: “In general there is a problem with termites. We encounter them everywhere, especially areas with lots of dry trees, and normally they damage door frames, windows and cupboards.”

Another leading pest control firm, Atom Exterminators, has also reported an increasing problem with termites and other wood eating pests, like woodworm and dry rot treatment.

Asked about these, Atom’s boss – and Cyprus pest control association president – Michael Michael, said these are making their way onto the island in increasing numbers, stowed away in imported, middle eastern furniture.

“In Cyprus we have a very big problem with termites, dry rot and woodworm – and an EU committee on pests has put Cyprus in the red zone for termites.”

In the meantime, the growth in termite infestations has been fuelled by the property boom in the last decades, which has seen more houses encroach on termites’ natural environment habitat.

According to Michael, the most vulnerable houses are new builds in semi rural areas, where dead wood has been removed to make way.

“There are two types of termites in Cyprus, subterranean and drywood. For the subterranean colonies we put special chemicals in the ground, and for drywood termites it depends on the age of the house.”

In addition to the chemical treatment, Atom use a “Thermokill” method, which uses heat for an instant kill and in the case of widespread infestation, fumigation.

“If the termites have infested the bedroom wardrobes, kitchen cabinets and even the roof, the house must be insulated and fumigated,” he said. “For up to five days after the start of fumigation, depending on the degree of infestation, all residents and pets should keep out of the house.”

Atom is also well equipped to tackle other pests: “For woodworm we also have a mobile unit-we are the only company in Cyprus to have this, although the (agriculture ministry’s) forestry service has one.”

Asked about how the new houses become infested, Michael says that the long construction period of such houses – typically lasting between 18 months and two years leaves the homes open to the elements and invasions by all sorts of creepy crawlies, and aside from termites, he has known cockroaches, rats and fleas to take shelter in developments.

Such infestations, he says are easily prevented by preparing the land and treating the building at key points in the construction phase with chemicals.

“Once the plot is cleared, all areas are sprayed thoroughly (including the future garden area). This way we eliminate any already existing termite nests and we create a barrier zone for future invasion attempts.”

After this, says Michael, the exterminators respray the plot, bricks and garden area before the final stage: “After the building is completed, we fumigate and liquid spray the sewage system and the external and internal areas of the building and all other areas… This not only eliminates termites and other wood-infesting insects, but all other kinds of insects and rodents as well.”

This preventative treatment costs €3,500, but it if it avoids later infestations, could be money well spent. Indeed, Michael believes planning authorities should introduce legislation to enforce such measures prior to the sale of any new-build.

Unfortunately, the government is lagging behind the rest of Europe in terms of pest legislation.

A July 29 EU Directive on pesticide regulation is unlikely to be enforced until early 2013, and there is no legislation requiring house-sellers to ensure homes are not termite infested – as exists in Italy.

As a consequence, many developers are cutting costs and leaving it to new home-owners to foot the bill when the bugs invade.

“The government has not done anything yet” says Michael. An Agriculture Ministry source confirmed there were currently no plans in the pipeline to enforce termite infestation assessments, yet acknowledged it was a good idea.

For more information about termites in Cyprus – and the treatments on offer, visit Cyprus Termites.