THE POPULATION census that was launched in October last year has now been completed and the Cyprus Statistical Service (CySTAT) has published the preliminary results of its analysis relating to population and housing.

Foreigners now account for more than 1 in 5 of the population at 21.4% having risen from less that 1 in 10 (9.4%) a decade ago. The majority of those are from Greece, followed by the United Kingdom, Romania and Bulgaria.

It is also worth noting that number of vacant/secondary housing units in Famagusta and Paphos exceeds the number of occupied units in both districts. 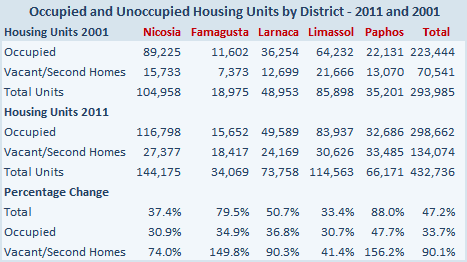 These numbers do not include the thousands of unsold and partly-built properties littering the areas once popular with overseas property investors.

Cyprus Statistical Service Preliminary Results of the Census of Population, 2011

Building permits authorised in Cyprus during May 2019 provided for the construction of 907 new homes, compared with 541 in May 2018 according to official figures published by the Cyprus Statistical Service.
Read more
Property Statistics