Protest at ‘A Place in the Sun Live’ property exhibition 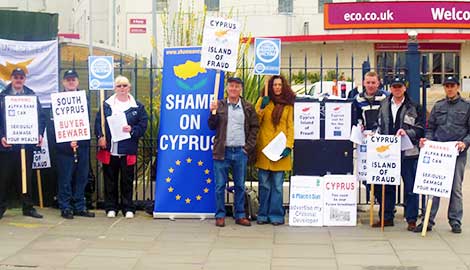 THOUSANDS of visitors to the ‘A Place in the Sun Live’ exhibition at Earls Court in London over the weekend were greeted by a group of protesters who were raising awareness of the potential problems associated with buying property in the Republic of Cyprus.

Many of those protesting believe they have been defrauded or mis-sold property and are exasperated by the unacceptable delays in the Island’s judicial system; some of their cases have been dragging on in the courts for many years.

Carrying placards reading ‘Shame on Cyprus’, ‘Cyprus Island of fraud’ and ‘South Cyprus buyer beware’ the protesters discussed the potential pitfalls of buying off-plan properties with visitors to the exhibition and handed out leaflets warning of the dangers.

Stelios Kyriakides from the Consular Directorate in London and part Foreign Office’s ‘Know Before You Go Team’, which had a stand at the exhibition, came out and talked with the protesters.

Organised in conjunction with the popular Channel 4 TV programme, ‘A Place in the Sun Live’ claims to be ‘the UK’s biggest and best-attended overseas property exhibition’.

The protest passed without incident.