FINDINGS of an investigation conducted by Leaf Research into the property market in Larnaca show that there has been a significant decrease in the number of land transactions over the past few years along with falling prices.

Leaf Research’s survey results are based on an analysis of 23,394 transactions registered at the Land Registry office in Larnaca between 2006 and 2011. These transactions relate to properties whose ownership has been transferred to the name of the buyer, as well as sale and purchase agreements where a contract has been deposited against a given property.

This analysis forms part of a much larger analysis of Land Registry data being undertaken by Leaf Research known as ‘Project RED‘ (Real Estate Dynamics).

Larnaca was chosen for the analysis because of its size and the relatively balanced nature of its property market compared with other parts of Cyprus. Although Larnaca has a significant proportion of overseas buyers, it does not have as high a proportion as Paphos or Famagusta – and it also lacks any ‘special factors’ that could affect prices; for example the lack of overseas demand in Nicosia and the high density of Russian speaking buyers in Limassol.

The main conclusions resulting from the analysis show that there has been:

The price table below shows the median price of various classifications of property declared to the Land Registry.

Since prices peaked in 2008, the median declared prices for fields has fallen 67%; those for building plots are down 31%, while those of apartments and houses are down 20% and 11% respectively. It is also clear that prices of fields started to decline much earlier. 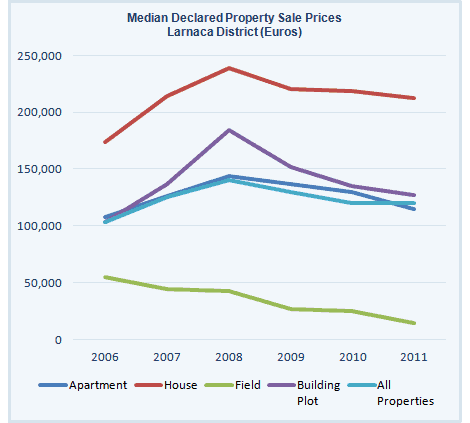 LEAF Research has also calculated the loss of revenue to the government resulting from its inability to transfer title (ownership) of a property to its purchaser at the time of delivery.

This loss in revenue amounts to the taxes paid by purchasers (Property Transfer Fees) and sellers (Capital Gains Tax) on the legal completion of a sales transaction.

That amounts to approximately €121,000,000 to be received by government only when (and if) the Title Deeds are issued and when (and if) both the purchaser and seller agree to carry out the transfer.

The Cyprus house price index rose by an average of 2.5 per cent in the first quarter of 2020 compared to the previous quarter according to official figures from the Cyprus Statistical Service (CYSTAT)
Read more
Property Sales

The number of property sales contracts deposited at Land Registry offices across Cyprus recorded a sharp drop in May.
Read more
Property Prices

The Cyprus house price index (HPI) fell by 3.7 per cent in the third quarter of 2019 and by 4.8 per cent on an annual basis according to a preliminary estimate by the Cyprus Statistical Service (CYSTAT).
Read more