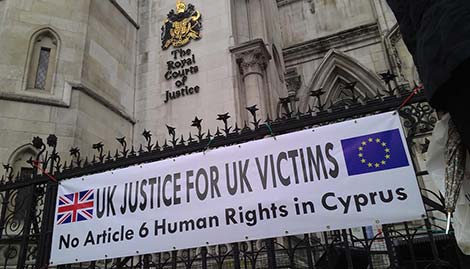 THE jurisdiction hearing in the High Court in London has been decided in favour of the claimants; Brits who purchased off-plan property in Cyprus from Alpha Panareti and its agents.

Lawyers acting on behalf of the claimants had brought a case of negligent misrepresentation and breach of contract against the defendant Alpha Panareti in the High Court. However, the defendant challenged the jurisdiction of the Court arguing that the rightful jurisdiction was Cyprus.

Master Whitaker, who heard the case, rejected the defendant’s arguments and concluded that actions against Alpha Panareti, brought by lawyers acting on behalf of the claimants could be heard and decided in the UK, including claimants from Scotland.

The defendant may seek leave to appeal the decision once a written judgement has been handed down.

Messages flooded into Facebook once the ruling was announced congratulating the claimants and Dr Katherine Alexander-Theodotou and the Highgate Hill team who argued their case successfully in the High Court. Others spoke of the sense relief that filled the court room when Master Whittaker gave his judgement.

We understand that the ruling only applies to a narrow band of consumers; specifically to those who signed contracts in the UK to purchase property in Cyprus.

In April 2011, MEP David Martin raised a question in the European Parliament concerning Alpha Panareti in which he referred to a “fraudulent property scheme” that “continues to affect thousands of EU citizens”.

In October 2011, BBC Inside Out North East and Cumbria broadcast an investigation into a 500 million pound property investment scheme involving Alpha Panareti and why advice given by a Teesside estate agent may not add up.

We understand that the Police are continuing their investigations.