SINCE the Royal Institute of Chartered Surveyors (RICS) published the first issue of its Property Price Index back in January 2010, we have been tracking property prices and how these have changed in different areas of the Island over time.

Since the first quarter of 2010, average prices for residential properties have fallen by 17%; a 15% drop in house prices and a 23% fall in apartment prices.

It is perhaps not surprising that apartment prices have fallen by more than those of houses. There has been much speculative building of apartments in the seaside towns, which has resulted in a massive oversupply in those areas.

Since the first RICS Property Price Index was published, prices of residential apartments in the Paralimni/Famagusta area have been the hardest hit, with prices falling by 31%. Although not recorded in the Index, anecdotal evidence suggests that prices of holiday apartments designed for the overseas market have fallen still further and that ground floor apartments and penthouses are being bought by Nicosians, looking for a weekend retreat, at knockdown prices.

Prices of residential apartments in the Larnaca and Paphos areas have fallen by around 26% and, as for Paralimni/Famagusta, prices of holiday apartments designed and built for the overseas market have faired worse.

Apartment prices in the mainly residential areas of Limassol and Nicosia, the capital, were holding up fairly well until the third quarter of 2011, when they started to decline more sharply. This was probably as a result of fears over the worsening economic situation and the uncertainty and chaos that followed the destruction of the Vassilikos power station by a massive explosion of carelessly stored munitions. 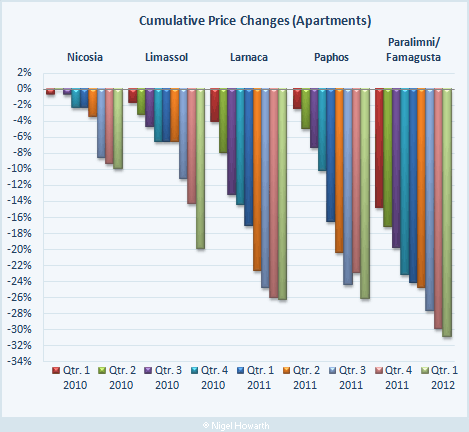 House prices have faired better, although there was a sudden decline in the third quarter of 2011  in Nicosia and Limassol, the major business centres of the Island, following the destruction of the Vassilikos power station.

House prices have dipped sharply in Limassol, falling by 22% since the first quarter of 2010. As reported in the RICS Property Price Index that we published yesterday, Limassol was the least affected area until the second half of 2011 and the one that has experienced the greatest reduction in interest by overseas buyers.

House price falls in Larnaca may have stabilised at -18%; no falls have been reported over the past three quarters. Prices in Paphos have fallen by 16% and they are down 13% in Paralimni/Famagusta. Nicosia remains the most resilient area with house prices falling by just 6% since the first quarter of 2010. 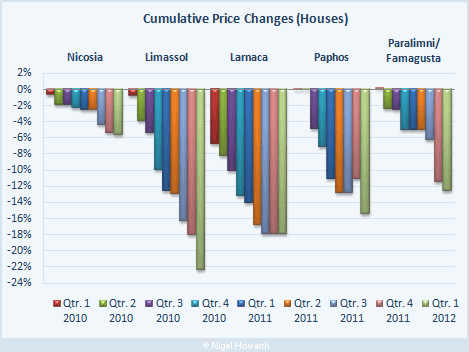 The economy still has problems although the result of the recent Greek elections has “pulled Cyprus back from the precipice” according to a Reuters report. Had the Greeks voted for the leftist Syriza, it’s been estimated that Cyprus would have needed €10 billion or more if Greece were pushed out of the Euro.

As things stand, Cyprus needs Cyprus needs to raise 1.8 billion Euros by the end of the month to recapitalise the Popular Bank plus a further 3 billion Euros or so to refinance the public debt. Whether it will get this money from Russia or the EU is unclear, but most commentators believe that Russia is the odds-on favourite.

If the government can take the necessary steps to improve the economy, reduce unemployment, ease money supply and restore confidence, we may see a slowdown in the rate of price falls or possibly a reversal of the downward trend in the more popular residential areas of the Island.

However, Title Deeds (or rather the lack of them) remain the ‘elephant in the room’. Although the government introduced legislation last year designed to improve consumer protection, it still has much work to do to fully resolve the problems.