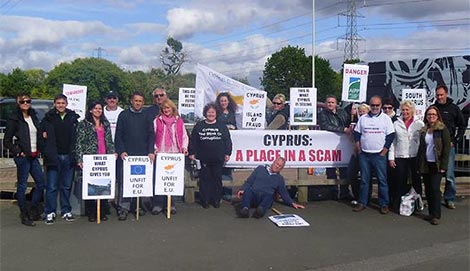 PROTESTORS from around the UK braved the chill autumn weather and converged on the NEC Birmingham and greeted visitors to the ‘A Place in the Sun’ exhibition to raise awareness of the potential problems associated with buying property in Cyprus.

Those taking part in the demonstration believe they have been mis-lead and cheated by estate agents, financial consultants, developers, lawyers and bankers in Cyprus and the UK.

The plight of some of the protestors was the subject of a BBC TV documentary broadcast last year that investigated a 500 million pound property scheme that had turned sour. Many hundreds involved in that scheme and others caught in similar schemes are now taking legal action in efforts to recover their money.

The protesters discussed the potential pitfalls of buying off-plan properties with visitors to the exhibition and handed out leaflets warning of the possible dangers.

Organised in conjunction with the popular Channel 4 TV programme, ‘A Place in the Sun Live’ claims to be ‘the UK’s biggest and best-attended overseas property exhibition’.