No let-up in catastrophic sales downturn

RECORD levels of unemployment, lack of liquidity, the economic situation, uncertainty in the market and the Title Deed fiasco continue to depress the Cyprus property market.

According to the Troika’s estimates the number of houses for sale will reach 50,000; but the banks disagree, referring to this number as “outrageous”. In its draft memorandum to the Cyprus government, the Troika has made several suggestions that could help encourage both domestic and overseas sales, including: the establishment of a ‘bad bank’ to take over toxic assets, clearing the backlog of between 120,000 – 130,000 Title Deeds held up in the logjam and more effective Land Registry systems.

During September a total of 442 contracts for the purchase of property were deposited at Land Registry offices across the island compared with 608 in September last year; a year-on-year fall of 27%.

Overall 130 fewer properties were sold in September compared with the corresponding month last year; a fall of 26%.

However, the number of properties sold in Paphos went up by 40 (44%) compared with September 2011. 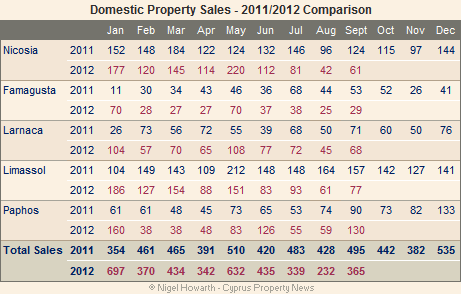 Overall sales in September were down by 36 (-32%) compared with the corresponding month last year and, with the exception of Limassol, sales were down in all districts. 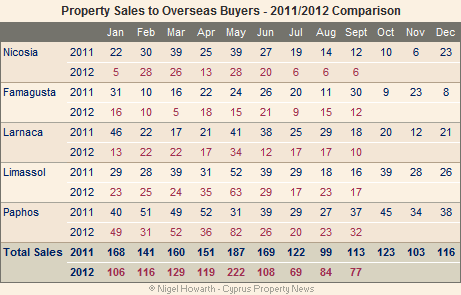 Facebook
Linkedin
Twitter
Previous articleAre we about to meet our NAMAsis?
Next articleGovernment tax hike will hit small home owners