PROPERTY sales in Cyprus continued to decline in October with a total of 454 contracts deposited at Land Registries across the island compared with the 565 deposited in October 2011; a fall of 20 per cent.

However, October’s 20 per cent decline is lower than the 27 per cent decline experienced in September and this may be a sign that the downward trend is starting to slow down and level out as we approach the end of the year.

Recently, uncertainty in the market has been heightened by the troika’s proposal that banks should repossess homes held against non-performing loans within 18 months – and by the as yet unknown role of the proposed ‘Cyprus Asset Management Company’; a ‘bad bank’ that will ‘buy’ non-performing and non-core assets at their real (long term) economic value and maximise their recovery over the medium term.

Teams of valuers from several Cypriot and overseas companies are currently valuing properties used as collateral against mortgages and other bank loans – and it is unlikely that we will know how much the banks will need for a bailout until early next year.

Other factors depressing domestic sales are the record level of unemployment in Cyprus, which climbed to 12.2 per cent in September, one of the highest year-on-year increases in the European Union – and the proposed hike in property taxation.

On a more positive note, revenue from tourism soared to a new record high of €312.1 million in August and tourist arrivals are up by more than 10 per cent this year.

Overall 90 fewer properties were sold in October than in October last year; a fall of 20%.

However, 20 more properties were sold in Paphos (+27%) than in October 2011, while the number of sales in Larnaca was unchanged at 60. 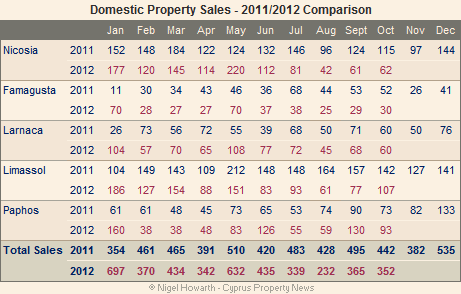 Cyprus-wide sales to the overseas property market fell by 21 (-17%) in October compared with October last year and, with the exception of Famagusta, sales were down in all districts.

Famagusta bucked the trend with 6 more properties being sold; a 67% increase on the 9 sold during October 2011. 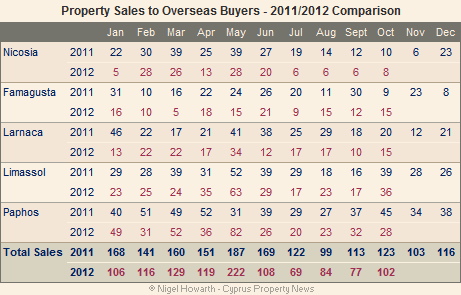