Cyprus construction activity may be improving

THE NUMBER of building permits issued in August 2012 stood at 477 compared with the 478 issued in August last year; a small decrease of 0.2%, according to the latest figures released by the Cyprus Statistical Service.

During the period January – August 2012, 4,761 building permits were issued; a decrease of 6.7% compared to the number issued in the same period last year, while the total value of these permits fell by 23.4% and their total area fell by 31.1%.

The 293 residential building permits approved in August provided for the construction of 422 new homes comprising 233 single houses and 189 multiple housing units (such as apartments and other residential complexes).

This is an increase of 5% compared with August 2011 when building permits were issued for the construction of 403 new homes.

During the first eight months of 2012, the number of new homes for which permits have been issued has dropped 35.7% compared with the same period last year. 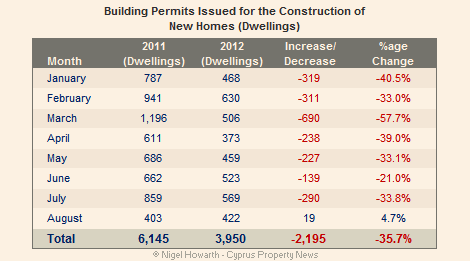