Signs of recovery in overseas sales

AS WE reported last Friday a total of 444 contracts of sale were deposited at Land offices across Cyprus compared with the 485 deposited in November 2011.

Although this is drop of 8 per cent, the number of properties sold to overseas buyers jumped by more than more than two thirds according to Land Registry figures released earlier today.

Overall sales in November increased by 69 (67%) compared with the corresponding month last year, with sales up in all districts.

Larnaca recorded 18 sales, an increase of 50% on the 12 sold last year and Famagusta saw sales increase by 48% reaching 34 compared with the 23 sold last year.

Limassol experienced the lowest increase with 29 properties being sold compared to 28 last year; a rise of 4%. 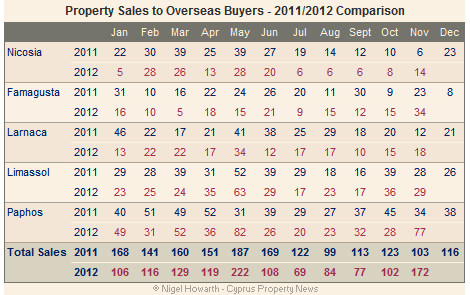 According to the local media, 50 residence permits have been issued to non-EU nationals since the government introduced the scheme whereby those buying property costing €300,000 or more could seek a permit to stay on the island; the Interior Ministry is considering a further 600 applications.

We have now received reports from two sources that a number of Chinese buyers are already complaining that they were sold properties in Paphos at grossly inflated prices. Developers who have killed one golden egg-laying goose now seem intent on killing another.

The decline in domestic sales continued in November with a total of 272 properties sold compared with the 382 sold in November last year; a fall of 29 per cent.

(Note there is a discrepancy in the figures for Famagusta that I expect the Department of Lands and Surveys will correct in due course.) 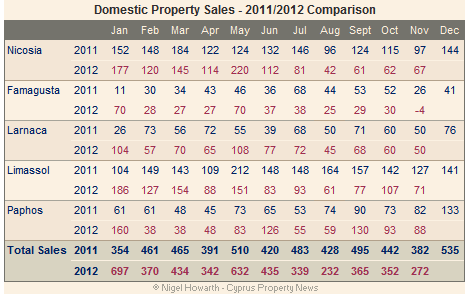