AS we reported on Monday, the number of properties sold in Cyprus during January stood at 375; the lowest monthly figure since records began.

Overall, 394 fewer properties were bought by Cypriots in January than in January last year; a fall of 57 per cent and sales were down in all districts. 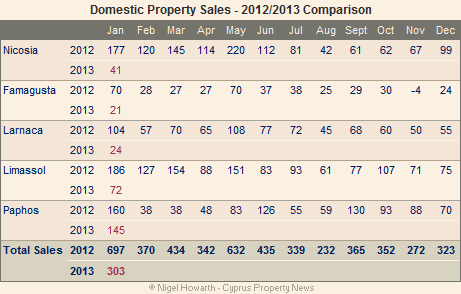 Record levels of unemployment, with the jobless rate standing at 14.7 per cent in December, together with uncertainty of the future of the island’s economy plus much talk of increasing Immovable Property Tax are keeping buyers away.

Cyprus-wide sales to the overseas property market fell by 34 (-32%) in January compared with January last year; with the exception of Nicosia, sales were down in all districts.

Five properties in Nicosia were sold to overseas buyers, the same as in January 2011. 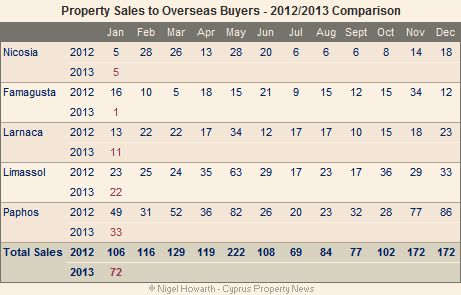 Estimates of sales to Chinese buyers reaching 2,000 this year appear somewhat ‘optimistic’ – particularly as Chinese investors from Hong Kong have recently published details of their unhappy experiences of buying property in Paphos on the Internet.

A report in the local media claiming that in less than five months more than 800 properties have been sold to third country nationals seeking residence permits appears somewhat exaggerated.

Property sales got off to a disappointing start in the first month of the new decade, but stayed ahead of the number sold in January 2017 according to official figures from the Department of Lands & Surveys.
Read more