Hope for property sales in Cyprus

WHILE property sales in February continued to decline, it appears that the rate of decline may be slowing and improvements were seen in Paphos where sales to both domestic and overseas buyers increased compared to February last year.

Overall, property sales in Cyprus fell in February with a total of 352 contracts deposited at Land Registries across the island compared with the 486 deposited in February 2012; a fall of 28 per cent.

With the exception of Paphos, where overall sales jumped from the 69 recorded in February 2011 to 128 (an increase of 85.5 per cent), sales fell in all other areas of the island compared to 2011.

Last month Cyprus elected a new President, Nicos Anastasiades, and with him comes the hope of a swift conclusion of a bailout deal with the troika and end to the island’s economic uncertainty.

Overall 125 fewer properties were sold in February than in February last year; a fall of 34%. 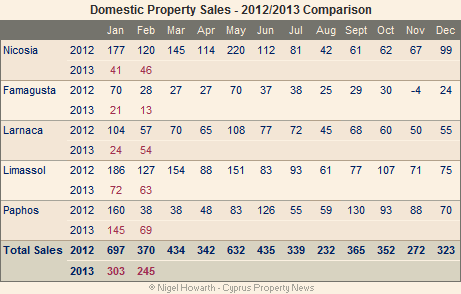 Cyprus-wide sales to the overseas property market fell by 9 (-8%) in February compared with February last year, but were buoyed up by sales in Paphos, where much effort has been put into enticing overseas investors from China.

Famagusta recorded the lowest fall in sales with just 2 properties being sold to overseas buyers in February down from the 10 sold in February last year (-80%).

Nicosia saw sales drop by 54%, with the number of properties sold falling from 28 in February 2012 to 13 last month.

Sales in Paphos made significant headway with sales up 90%, increasing from 31 in February 2012 to 59. Although the Department of Lands and Surveys does not publish the nationalities of foreign buyers we suspect that the majority of these sales would have been made to buyers from China following exhibitions in the country promoting Cyprus as a destination for overseas investment. 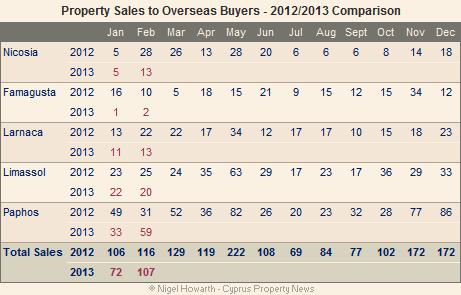 The Cyprus House Price Index (HPI) fell by 4.8 per cent in the third quarter of 2020 compared to the previous quarter according to preliminary figures in a pres...
Read more
Articles

Peyia is mulling what steps to take after losing a court case to block the development of a hillside above the Paphos town. The local municipality had challeng...
Read more