THE NUMBER of properties sold in Cyprus during March fell to the lowest monthly figure since records began with sales plummeting in all districts.

According to Department of Lands & Survey figures published today, a total of 286 contracts of sale were deposited in Land Registry offices across the island compared with the 563 deposited in March 2012; an annual decline of 49%.

Domestic sales in March declined by 51%, falling to 214 from the 434 sold in the same month last year.

Sales in Famagusta fell by 79% and sales in Limassol were down 74%. Sales in Nicosia declined 48%, while sales in Larnaca dropped by 31%. 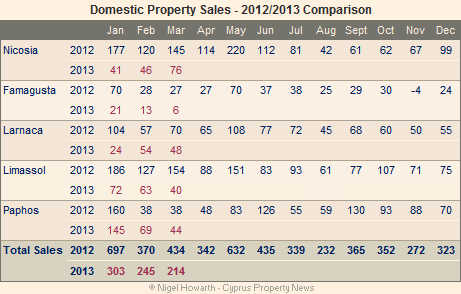 During the first quarter of the year domestic sales have fallen 49% compared with the same period last year,

Despite the anticipated demand from Chinese investors, overall sales to the overseas market declined 44%, falling to a mere 72 compared with the 129 sold in March last year.

Apart from Famagusta, where the number of properties sold increased by 2 (+40%), sales were down in all the other areas. 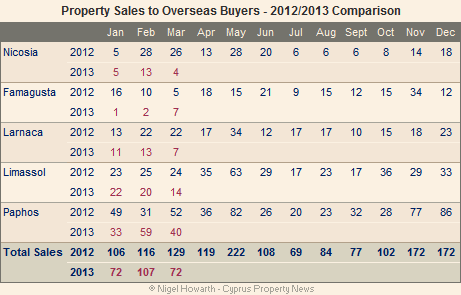 During the first quarter of the 2013 overseas sales have fallen 45% compared with the same period last year.