LATEST figures from the Department of Lands and Surveys show that a total of 285 contracts of sale were deposited at Land Registry offices across Cyprus in April 2013 compared with the 461 deposited in April last year; an annual decline of 38% and the lowest monthly figure on record.

With the exception of Paphos, where overall sales increased by 7% compared with last year, sales fell in all districts: Nicosia -71%, Limassol -42%, Famagusta -38% and Larnaca -29%.

During the first four months of 2013 a total of 1,298 properties have been sold, down 44% compared with the 2,313 sold during the corresponding period last year.

Sales in Famagusta fell by 85% and sales in Nicosia were down 85%. Sales in Larnaca declined 46%, while those in Paphos and Limassol fell by 40% and 26% respectively. 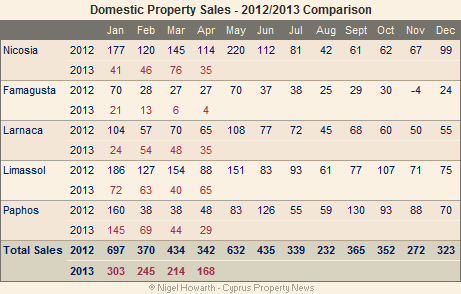 In efforts to encourage sales in response to the financial crisis ten construction companies, in conjunction with an estate agent, are offering houses and apartments at reduced prices. Typically new two-bedroom apartments in Strovolos (Nicosia) that normally retail at around €130,000 are now priced at €105,000.

Although overall sales to the overseas market in April declined 2% compared to April 2012, sales in the districts of Paphos, Larnaca and Famagusta increased. These may be due to purchases by those seeking residency permits or citizenship though various government schemes and perhaps those seeking distressed sales at bargain prices.

In contrast, however, overseas sales in Nicosia and Limassol have fallen dramatically, dropping by 85% and 80% respectively. 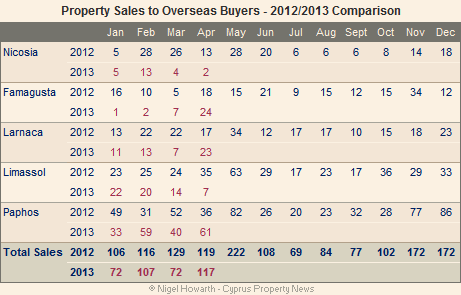 During the first four months of 2013 property sales to overseas buyers have fallen 22% compared with the same period last year.