LATEST figures from the Department of Lands and Surveys show that a total of 214 contracts of sale were deposited at Land Registry offices across Cyprus in May 2013 compared with the 854 deposited in May last year; an annual decline of 75% and, once again, the lowest monthly figure on record.

During the first five months of 2013 a total of 1,512 properties have been sold, down 52% on the 3,166 sold during the corresponding period last year.

Speaking to StockWatch property valuer Polys Kourousides attributed the decline in sales on the Eurogroup decision to restructure the banks and the haircut on uninsured bank deposits.

“There are no Cypriot buyers due to lack of liquidity and the inability of banks to grant loans. External demand is also negative due to Cyprus’ defamation abroad after Eurogroup. Foreigners are waiting to see how the situation develops before making any investment”, he said.

Domestic sales in May were down 57% compared with May last year, with sales falling in all districts.

Sales in both Nicosia and Famagusta fell 91% and sales in Limassol were down 71%, while those in Larnaca and Paphos fell 64% and 61% respectively. 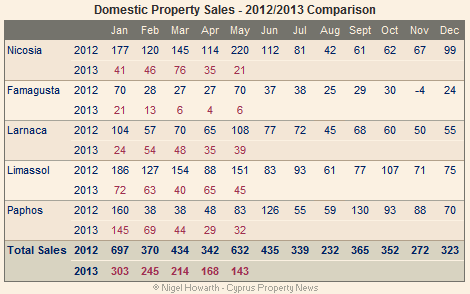 Despite the interest being shown by foreign investors, mainly Chinese and Russian, sales to overseas buyers fell in all districts, down 68% compared with May 2012. 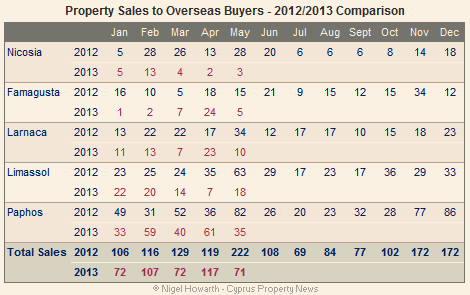