A PAPER recently published by the European Commission entitled “The Economic Adjustment Programme for Cyprus” provides an insight into the findings of the troika delegation out of which came the Memorandum of Understanding for the island’s bailout.

The paper contains several references to the property and construction sectors, the most significant of which is reproduced below:

THE HOUSING market in Cyprus is of particular importance for both financial stability and fiscal sustainability, as it poses a serious risk to bank balance sheets.

The housing boom was accompanied by a rapid increase in loans to households (Graph 13a) and non-financial corporations up to 2008, leaving the Cypriot private sector the most indebted (in relation to the country’s GDP) among the euro-area Member States (on a par with Ireland). Indeed, loans amounting to 150% of GDP in 2011 were directly related to the domestic housing sector, with even more consumer and business loans collateralized with real estate.

The due diligence of the Cypriot banks has established that, in many cases, banks put a greater weight on collateral than on cash flows of the borrowers. Loans to residential developers and the construction sector exceed 50% of GDP in 2011, with more than half of them already having been rescheduled (estimate). Thus, an important part of bank balance sheets hinged on assets related to local house prices, which were experiencing protracted adjustment after a long boom. 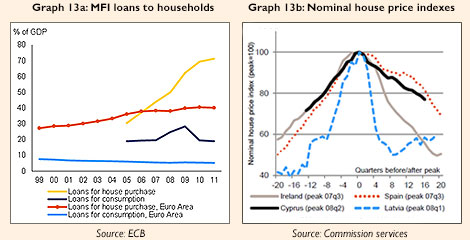 Moreover, supply and demand factors indicate that prices are set to undergo a further substantial decline, in particular prices for holiday homes. The pace of the house price decline will crucially depend on the amount of loan rescheduling and the efficiency of collateral seizure.

Repossession procedures are in turn affected by both the backlog of the land registry system (title deeds) and considerable delays in asset liquidation administration and judicial procedures.

Furthermore, the housing market will be affected by fiscal consolidation efforts via the rationalization of the existent myriad of housing assistance schemes and the implementation of a recurrent property tax system based on updated valuations of the tax base.

Collateral seizure is in turn influenced by both the backlog of the land registry system (title deeds) and considerable delays in asset liquidation administration and judicial procedures. Improving these settings would result in a more rapid supply increase and a swifter decline in house prices, and accordingly in earlier price stabilization.

The potential advantages of a swift decline in house prices would be: front-loading of mortgage book valuation losses, earlier restoration of confidence in the housing market and thus a pick-up in (external) demand, with a positive feedback to GDP growth. The risks lie mainly in front-loading effects on the economy and the risk of undershooting house prices and thus collateral values.

Registration and transfer of immovable property

In 2011, up to 120,000 – 130,000 properties lacked title deeds, i.e. the land registry does not reflect their building and ownership situation. Scattered evidence on the progress since 2011 indicates that only a rather small portion of pending cases have been resolved so far.

This regulatory issue creates a bottleneck for the housing market in two respects:

First, it acts as an impediment to demand, particularly from foreigners, as they are not able to fully enjoy the benefits of ownership (for instance, deeds are generally required as proof of mortgage collateral).

Second, there is a risk element for the bank mortgage books, as it is not clear how many (developer) mortgages are secured with title deeds that are actually outdated and should be replaced with new title deeds to be transferred to dwelling purchasers. This is compounded by the fact that a sales contract on immovable property represents a senior claim on the property for the amount that has already been paid, thus giving the buyer a secured creditor position.

Against this backdrop, the Parliament approved substantial reforms in 2011 (N81(I)/2011). The new framework introduced vested contracts, enabling the sale of a property without a deed, and provided purchasers and authorities with the rights to request, and enforce, the issuance of title deeds.

The approval of planning and building permits as a necessary prerequisite for the issuance of title deeds was identified as a major driver of the title deeds backlog, and has been tackled by the introduction of simplified approval procedures and a town planning infringement amnesty in 2011.

However, the effectiveness of these reforms hinges on their implementation in expediting the issuance of the more than 100,000 still-outstanding title deeds. Preliminary figures suggest this measure resulted in a substantial, but by far non-exhaustive, decrease in the title deeds backlog. Note, however, that any new title deeds issued still have to be transferred to the purchasers, which poses further risks for sales contracts concluded before 2011.

1 Note that this figure is based on the harmonized Eurostat house price index. Data from the Central Bank of Cyprus indicate that decline was less steep, and closer to 15% between Q3 2008 and Q2 2012.

The Economic Adjustment Programme for Cyprus – May 2013