LACK of liquidity and financing together with the on-going problems in the island’s economy and the construction and property sectors contributed to the continuing collapse of property sales in Cyprus.

Latest figures from the Department of Lands and Surveys show that a total of 266 contracts of sale were deposited at Land Registry offices across Cyprus in August 2013 compared with the 316 deposited in August last year; an annual decline of 16%.

With the exception of Nicosia and Paphos, where sales increased by 27% and 4% respectively, sales were down in all other districts. 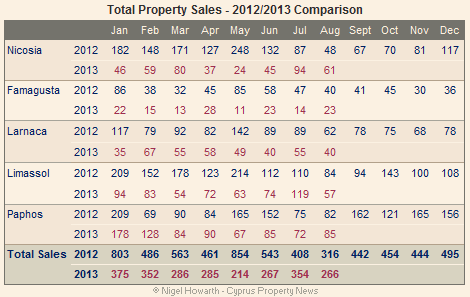 Some pundits expect that property prices will fall 30% in the coming years as a result of the lack of liquidity and the banks not granting loans, while the Economics Research Centre of the University of Cyprus says that: “Recession in the Cyprus economy is forecasted to deepen in the remaining of 2013 and in the first quarter of 2014. Subsequently real GDP growth is also projected to contract but at smaller rates” in its latest report.

Domestic sales during August were down 10% compared with August last year.

Although sales in Nicosia and Paphos increased by 29% and 9% respectively, the number of properties sold in Limassol, Larnaca and Famagusta continued to fall. 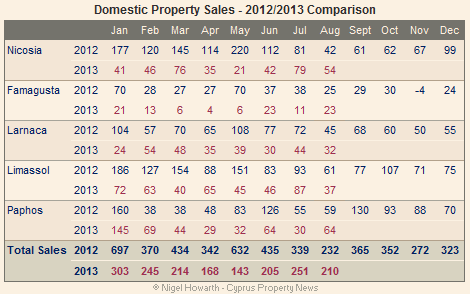 August was another disastrous month for overseas sales with the number of properties sold dropping to 56 compared with the 84 sold in August last year; a fall of 33%.

With the exception of Nicosia, where 7 properties were sold during August compared with 6 in August last year – an increase of 17%, sales continued to fall in all other districts. 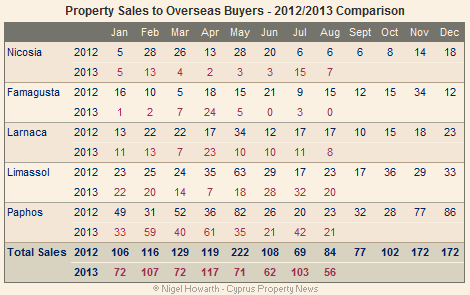 During the first eight months of 2013, property sales to the overseas market have fallen 31% compared to the same period last year having dropped from 953 to 660.