LATEST figures from the Department of Lands and Surveys reveal that a total of 285 contracts for the sale of property were deposited at Land Registry offices across the island in September compared with the 442 deposited in September 2012; a fall of 36% from last year’s low levels.

September’s slump in sales was attributable to a 43% drop in domestic demand; overseas demand remained unchanged from last year.

Sales fell in all districts, with Paphos being the hardest hit with sales dropping by 56%. Sales in Famagusta fell by 44%, those in Larnaca by 36%, while sales in Nicosia and Limassol fell by 18% and 9% respectively. 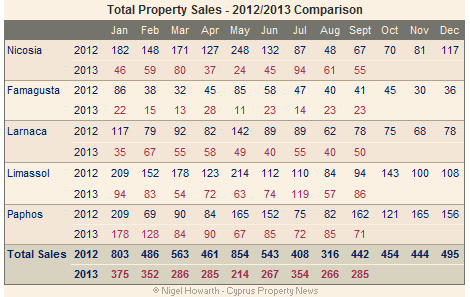 Pundits predict that the property market will continue to operate at very low levels due to the lack of liquidity and uncertainty about the future. And as we reported yesterday, Moody’s believes that the Cypriot banks may require a further €1.5 billion on top of the €2.5 billion already allocated as the value of assets [mainly real estate] deteriorate amid the severe recession.

Domestic sales during September were down 43% compared with September last year, having fallen to 208 from 365; sales were down in all districts.

Paphos was the hardest hit with sales dropping by a whopping 76%. Sales in Larnaca fell by 40%, those in Famagusta by 31%, while sales in Nicosia and Limassol fell by 20% and 13% respectively. 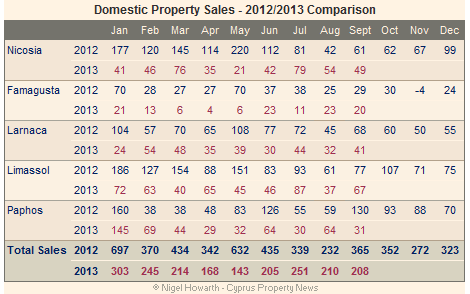 Sales to the overseas market remained the same in September as September 2012, with 77 properties being sold.

Although sales in Famagusta and Larnaca fell by 75% and 10% respectively, sales in Paphos and Limassol increased by 25% and 12% respectively, while sales in Nicosia remained at the same level as last year. 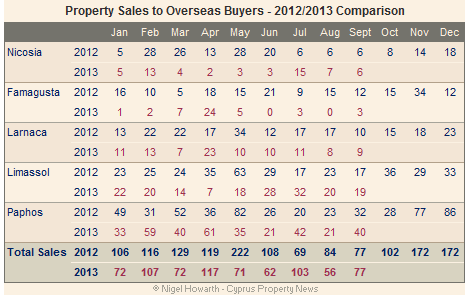 We understand that the increased sales in Paphos and Limassol are mainly as a result of Chinese nationals buying residential properties costing more than €300,000 to secure visas and also Arabs who are fleeing the upheavals in their countries.

During the first nine months of 2013, property sales to the overseas market have slumped 28% compared to the same period last year having dropped from 1030 to 737.

The rise and fall of the real estate market

AT THE start of the 21st century property sales began to increase as more overseas investors were attracted to the island once its accession to the European Union had been confirmed.

The increased demand resulted in higher prices – particularly in the price of land, which rocketed making the purchase of a home unaffordable for many domestic buyers. Domestic sales peaked in 2004 and have fallen from nearly 12,000 to less than 2,000 in the first nine months of this year.

Sales to the overseas (mainly British) market flourished with more than 11,000 being sold 2007. But the economic downturn in the UK together with the Title Deed-cum-fraud mess resulted in a collapse in sales which, apart from a ‘dead cat bounce’ in 2010, continues to this day with just 737 properties being sold to non-Cypriots during the first nine months of 2013. 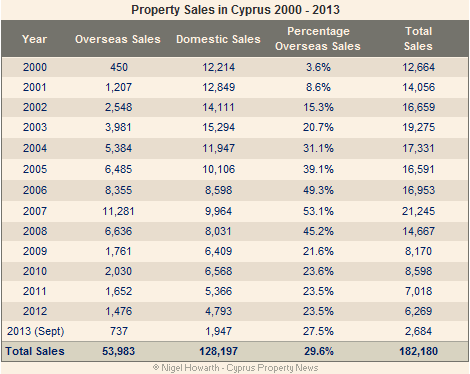 Although the previous government introduced a new Specific Performance law to provide additional protection to those buying property, the new law has done nothing to inspire confidence in the market.

And perhaps not surprisingly, a statement in 2009 by the former Interior Minister Neoclis Sylikiotis that “property investment is much safer in Cyprus than anywhere else” fell on deaf ears.

The figures above show that the Cyprus government and the island’s real estate sector have to do much, much more before the property industry can haul itself out of the abyss of its own making.