THE NUMBER of building permits issued in August stood at 351 compared with the 447 issued in August 2012; a fall of 22%, according to figures released earlier this week by the Cyprus Statistical Service.

During the first eight months of 2013 a total of 3,220 building permits were authorised; a drop of 25% compared with the 4,284 permits issued during the same period last year. Their total value has fallen by 20% and their total area by 28%.

The 250 residential building permits approved in August provided for the construction of 232 new homes comprising 124 single houses and 108 multiple housing units (such as apartments and other residential complexes).

This is a fall of 45% compared with August 2012 when building permits were issued for the construction of 422 new homes.

During the first eight months of 2013, the number of new homes for which permits were authorised has fallen by 28% compared with the same period last year. 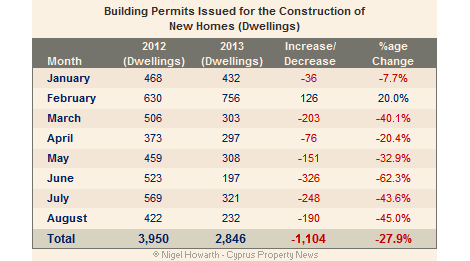 The Cyprus construction sector staged a slight recovery May falling by just 0.1% compared to May 2019 according to official figures released by the...
Read more
Property Statistics