THE Cyprus property market appears to be sinking into total oblivion with property sales in 2013 having fallen to their lowest level on record with no signs of a recovery in the near future.

Last month the Inland Revenue Department presented a list to parliament of individuals and companies who had failed to pay their Immovable Property Tax liability for 2013 and who owed more than €100,000 in unpaid tax for the year.

That list contained the names of 32 property development companies who together owed the Inland Revenue more than €10.5 million.

Needless to say this ‘naming and shaming’ caused an outburst from the Cyprus Land and Building Developers Association who objected to the “defamatory” way in which the developers were being depicted. Furthermore it considered that due credit had not been given to the many companies that that had managed to pay their tax under particularly trying circumstances and who had attracted hundreds of foreign investors to the housing market during the year.

Elsewhere it was reported that property developers and construction companies have loans with the Bank of Cyprus amounting to €8.5 billion, of which €5.1 billion are non-performing, while 40 per cent of the Cyprus Cooperative Credit Institutions loan portfolio of €13 billion has also been reported as non-performing.

Figures from the Hellenic, Alpha and the other banks have not been reported. 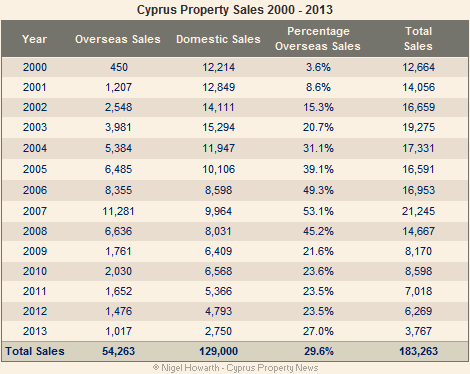 The rise and fall in Cyprus property sales

Sales to the domestic market started to rise as people became more affluent. Although wages and salaries managed to keep pace with construction costs, land prices rocketed as supplies became short, pricing many local buyers out of the market.

As a consequence property sales to the domestic market peaked in 2004 and have been in decline ever since. The downturn in the island’s economy, the haircut on deposits exceeding €100,000 in the island’s two largest banks (a condition of Cyprus receiving bailout money from the EU), the stricter lending criteria introduced by the banks, record levels of unemployment and uncertainty over the future has depressed demand even further. 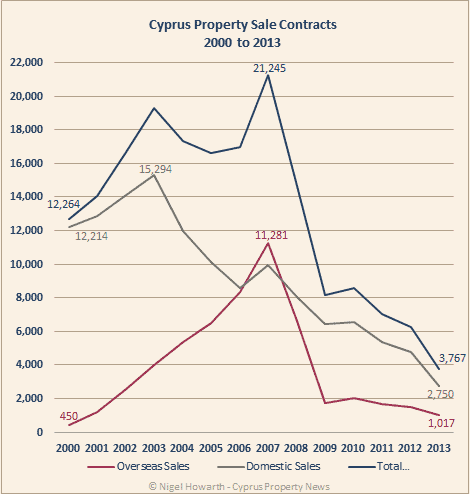 In the year 2000 just a handful of overseas buyers purchased property on the island, but this number started to increase when plans were announced for Cyprus to join the European Union.

Sales to overseas buyers, the majority of who were British, started to increase when plans for Cyprus to join to the European Union were announced. Sales continued to rise sharply until 2007, when the local demand for property was outstripped by foreign demand.

During this 7 year period many new property development companies emerged and jumped on the property bandwagon as ‘Klondike fever’ gripped the island. With no Government regulations to hold them back, these ‘entrepreneurs’ could be anyone from a taxi driver to a barman at an army camp. Many of them had little business experience or financial standing.

In 2007 problems with the UK economy resulted in a fall in sales to the British market. Then in October of the same year a damning TV documentary was broadcast throughout the UK about the massive problems in Cyprus with Title Deeds. (One of the people featured in the program is still battling the bank to keep their home 7 years after the program was aired and has spent many thousands of pounds in the process).

As news spread about the Title Deeds and other problems, the UK newspapers picked up on numerous bad stories and peaceful protests were held at overseas property exhibitions. As a result many Brits turned their back on Cyprus and started looking at safer places to buy their home in the sun.

The overseas market went into rapid decline and still shows no signs of a recovery. Property developers have switched their focus away from the UK to Russia and China with some success, with the Cyprus government offering incentives to non-EU nationals in efforts to encourage sales.

According to a statement make earlier today by Interior Minister Socratis Hasikos, during the last eight months of 2013 Cyprus attracted foreign investments of approximately €500 million – the majority of which were in real estate and construction.