LATEST figures from the Department of Lands and Surveys show that a total of 379 contracts to purchase property were deposited at Land Registry offices across Cyprus in December 2013 compared with the 495 deposited in December 2012; a fall of 23%.

With the exception of Limassol, where sales increased 18%, sales fell in all other districts:

Paphos was the hardest hit with sales falling 40%, followed by Larnaca where they fell by 39%. Sales in Nicosia were down 30% and those in Famagusta fell 19%. 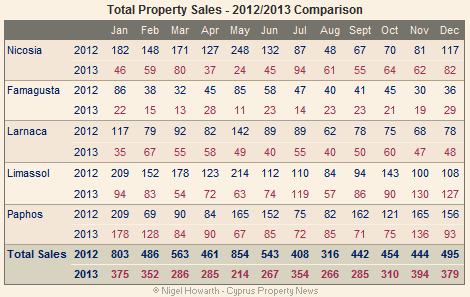 Speaking to Stockwatch, first vice president of the Cyprus Real Estate Agents Association Solomon Kourouklides said that although there is a demand in the market, transactions cannot be completed due to the banks’ tightened lending criteria and high interest rates.

Domestic sales in December fell 18% compared with December 2012 and although sales in Limassol went up 26%, sales fell in all other districts:

Famagusta fared worse with no zero properties being sold during December. Sales in Nicosia fell 30%, while those in Larnaca and Paphos fell by 26% and 11% respectively. 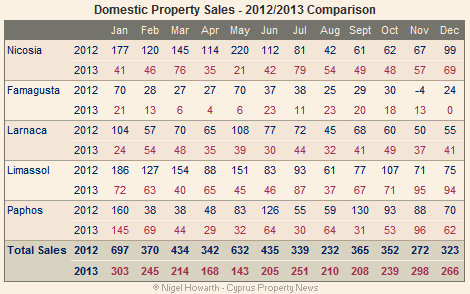 Sales to the overseas market fell 34% in December compared with December 2012.

Although sales in Famagusta more than doubled and sales in Limassol maintained the same level as the previous year, sales in Larnaca fell by 70%, while those in Paphos and Nicosia fell by 64% and 28% respectively. 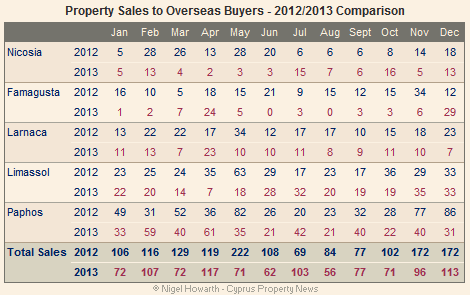