WITH thousands of unsold properties littering the island, record levels of unemployment, lack of liquidity and fears over the state of the economy, the real estate market seems to be going from bad to worse.

Property sales last year fell to their lowest level since records began in 2000 and the January 2013 figures issued by the Department of Lands and Surveys show a large reduction from the already low base of recent years.

During January a total of 293 contracts for the sale of commercial and residential properties and plots of land were deposited at Land Registry offices across Cyprus; a reduction of 22% on the 373 contracts deposited in January 2013.

These latest figures show a fall of 82% since January sales reached their peak in 2008 when a total of 1,615 contracts were deposited.

With the exception of Larnaca and Nicosia, sales fell in all districts.

The largest fall was recorded in Paphos, where the number of properties sold fell 48% to 93 compared with the 178 sold in January 2013.

On a more positive note, sales in Larnaca increased by 49% to reach 52 compared with the 35 sold last year and sales also increased in Nicosia, up 9% to reach 50 compared to the 46 sold in January 2013. 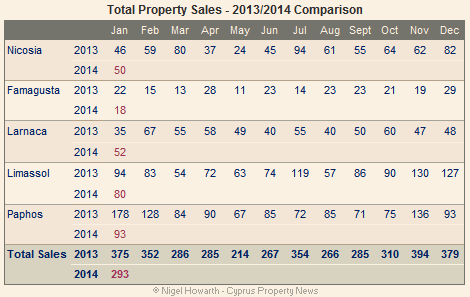 Domestic sales in January were down 31% compared with January last year, having fallen to 208 from 303.

Sales in Larnaca increased by 54% and those in Nicosia remained steady at last year’s level.

In contrast, sales in Famagusta fell 67%, while those in Paphos and Limassol fell by 60% and 10% respectively. 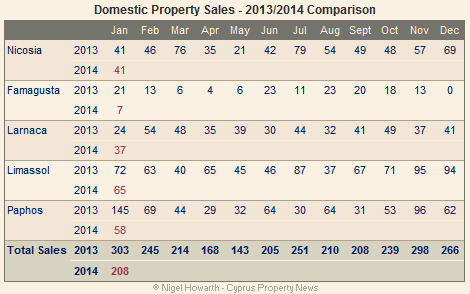 Sales to the overseas market improved 18% compared with January last year increasing from 72 to 85, giving some hope that a partial revival may be underway.

Although sales fell 32% in Limassol, they increased in all other districts.

Eleven properties were sold in Famagusta compared with just one in January 2013, an increase of 1000%! Sales in Nicosia increased 18%, while those in Larnaca and Paphos increased by 36% and 6% respectively. 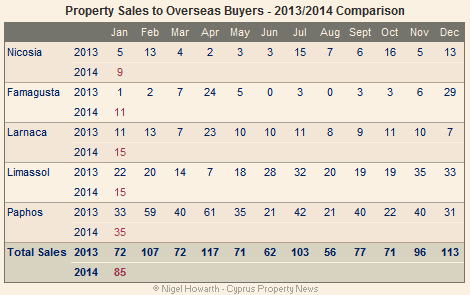