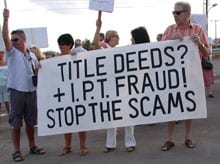 ALTHOUGH the majority of developers are billing their clients correctly for IPT they have paid on their behalf to the Inland Revenue, a handful are up to their old tricks and have reverted to charging their clients IPT based on a percentage of the property’s selling price.

Some of these developers are demanding prompt payment and threatening to impose penalties if clients fail to comply with their demands. A scare tactic that has prompted many of their worried and angry clients to write to Cyprus Property News seeking advice.

Immovable Property Tax is levied on the registered owners of immovable property; this includes land, and commercial, industrial and residential property. It is calculated on the total of the assessed 1980 values of all the properties registered in the name of individual and company tax payers and paid annually.

But this reliance on the honesty and integrity of individuals and companies changed last year following the Memorandum of Understanding (MoU) between the Cyprus Government and the troika of international lenders. IPT notices were sent to all registered owners of immovable property. The vast majority paid, enabling the government to achieve the property tax revenue target it had agreed with the troika.

However there were a number of notable exceptions who failed to pay by the due date. These were ignominiously named and shamed in ‘Politis’, a local Greek language newspaper.

Those who have purchased property off-plan may be obliged to refund their developer the IPT that the company has paid on their behalf. In this case their contact of sale will contain a clause similar to the following:

However, before reimbursing the developer for the IPT paid on their behalf, the developer is required to supply their buyers with records of the amount paid as Immovable Property Tax (IPT) and a certificate showing the rate of IPT applicable to the property. Please see this letter issued by the Interior Ministry.

Buyers are cautioned that if their developer fails to provide them with the information contained in the letter issued by the Interior Ministry:

To be able to reclaim any legitimate overpayments of IPT it is imperative that this information is printed on company letterhead bearing the company’s registration number, which has been stamped and signed by a representative of the company.

How is IPT calculated for off-plan properties?

Calculating Immovable Property Tax for a development can be a bit complicated, here’s an example of how it works:

Let us suppose that a developer has a plot of land registered in their name with a 1980 value of €150,000 shown on its Title Deed:

Let’s assume that a property is purchased on that development, which consists of ten properties, all are identical, all have the same sized plots and were all completed in the same tax year.

When the development is split eventually split into 10 individual properties, the Land Registry will assess their 1980 value using its historical data and issue a Title Deed for each property showing its 1980 value. This 1980 value may not be exactly the same as one tenth of the amount assessed by the Inland Revenue – but that doesn’t matter as any IPT overpayment can be recovered from the Inland Revenue.

(Note that the Inland Revenue will not refund any penalties it imposed on the developer due to his late tax return submission and/or payment. And of course a developer should not pass on these penalties to his clients, which result from his incompetence in running the business or through his negligence.)

After a buyer has paid the Property Transfer Fees and the property has been registered in their name, they will be able to claim any overpayments of IPT (assuming their developer supplies them with the information contained in the in the letter issued by the Interior Ministry) from the year they took delivery of the property.

This is because, as the registered owner of a single property, the 1980 value of that property will be enormously less than the total 1980 value of all the properties registered in the name of the developer. Consequently the rate at which IPT is levied is much lower.

In the majority of cases buyers will be able to reclaim from the Inland Revenue Department  all the IPT they paid to the developer for years up to and including 2012 and much of the amount they paid for 2013. (Before 2013 the registered owners of properties whose total value was below €170,000 were exempted from paying IPT).

In 2008 the Cyprus Property Action Group (CPAG) sought legal opinion on IPT and the charging practices of developers by Advocate, Partner and Head of Real Estate and Property Department of one of the largest law firms in Cyprus. You may read their report at: Immovable property tax & fraudulent practices.

The Cyprus house price index rose by an average of 2.5 per cent in the first quarter of 2020 compared to the previous quarter according to official figures.
Read more
Investor Centre