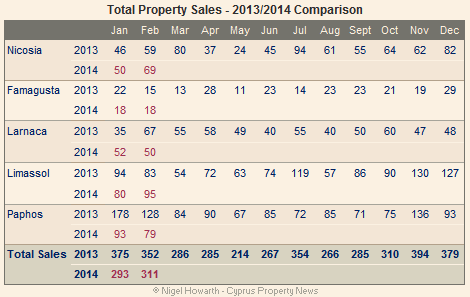 During February a total of 311 contracts for the sale of commercial and residential properties and plots of land were deposited at Land Registry offices across Cyprus; a fall of 12% on the 352 contracts deposited in February 2013.

But these increases were more than wiped out by falls in Paphos and Larnaca of 38% and 25% respectively.

Although domestic sales in January were down 6% compared with February last year, having fallen to 230 from 245, the fall was much less than the 31% experienced last month; an indication that confidence in the property market and the banking system may be returning.

Nicosia, the capital, experienced the greatest improvement with sales up 33% reaching 61 compared to 46 in February last year, while sales in Limassol rose 16% to reach 73 compared to 63 last year.

However, sales in the mainly tourist areas did not fare so well. Not a single property was sold in Famagusta, while domestic sales in Larnaca and Paphos fell by 37% and 10% respectively. 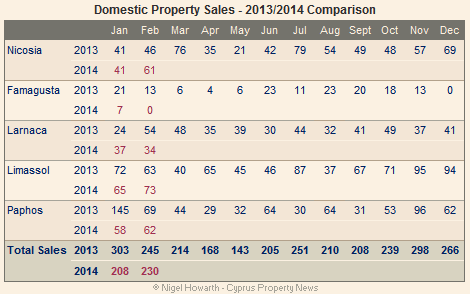 Sales to the overseas market were down 24% compared with February last year falling to 81 from 107.

Eighteen properties were sold in Famagusta compared with two in February 2013, an increase of 800%. Sales also improved in Larnaca and Limassol, increasing by 23% and 10% respectively.

But sales in Paphos, the area most popular with overseas buyers, fell 71% compared with February last year, while those in Nicosia fell 39%. 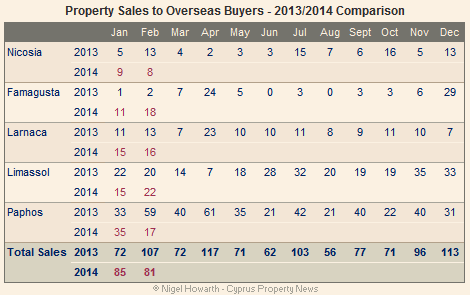 The latest figures from the Department of Lands and Surveys indicate that property sales to foreign buyers from the EU countries may be recovering,...
Read more
Property Sales

Property sales to the overseas (non-Cypriot) market continued to fall in August with numbers down 18% compared to the numbers sold in August 2019...
Read more
Property Sales

Property sales in Cyprus showed signs of making a recovery in June following the Government's easing of the COVID-19 lockdown measures and its decision...
Read more