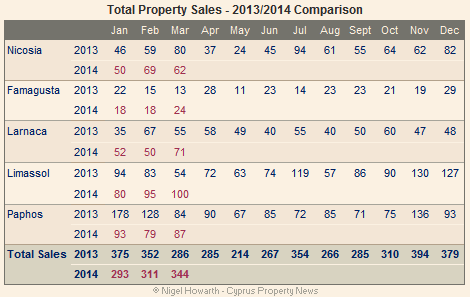 MARCH property sales statistics published by the Department of Lands and Surveys show an increase in the number of contracts for the purchase of property deposited at Land Registry offices across Cyprus compared to March 2013.

During March a total of 344 contracts for the sale of commercial and residential properties and plots of land were deposited at Land Registry offices across Cyprus; an increase of 20% on the 286 contracts deposited during the same period last year.

Although property sales in Nicosia fell 23%, they increased in all the other districts.

Sales in Limassol increased 85% to reach 100 compared to the 54 sold in March 2013. Sales in Famagusta went up 85%, while those in Larnaca and Paphos increased by 29% and 4% respectively.

Domestic sales in March increased by 13% compared with the same month last year, rising to 242 from 212.

With the exception of Nicosia, where sales declined 28% compared to March 2013, sales improved in all districts.

Limassol experienced the greatest improvement with domestic sales up 78%, reaching 71 compared to 40 in March last year – and after an abysmal performance in February, sales in Famagusta increased 67% compared to March last year. Meanwhile, sales in Larnaca and Paphos rose by 17% and 14% respectively. 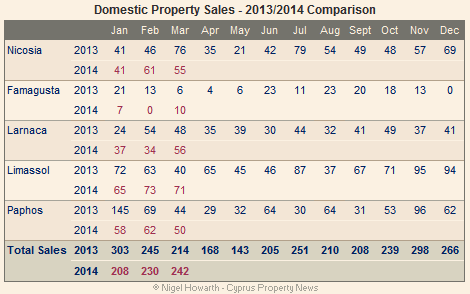 Sales to the overseas market in March improved 7% over last year rising to 102 from 72.

With the exception of Paphos, where sales weakened 8% compared to March 2013, sales improved in all districts, albeit from very low levels.

Larnaca led the charge with sales increasing 114% to reach 15 compared to the 7 in March last year. Sales Limassol increased by 107%, while those in Famagusta and Nicosia increased by 100% and 75% respectively. 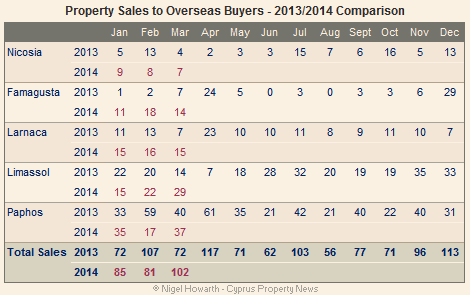