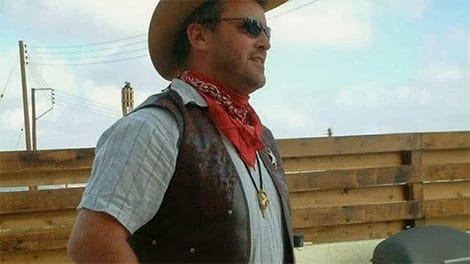 DOMINIC Littlewood and a team from Cowboy Builders Abroad visited Cyprus to look into the problems that Adrian Mills, a British developer, left behind when he fled the island in 2009.

Adrian Mills, the Managing Director of MDE Nest Homes, never completed the development of “Valley View” at Nata, leaving the site with no roads or mains electricity.

In 2005 Tom and Irene Owens bought a 3-bedroom timber-frame bungalow off-plan from Nest Homes and their son bought the one next door; neither of the properties was properly damp-proofed. And as the rot set in Tom and Irene’s son and his wife were forced to leave their home and their daughter now lives with her grandparents.

Another couple spent more than £50,000 repairing their house to make it habitable. When they took delivery Mills told them the electricity would be connected “in a matter of weeks”; it never arrived.

The development is built on bentonite; a clay that absorbs huge amounts of water, expanding by as much as 15 times its original volume and shrinking back as it dries out. It is used in the oil industry as a lubricant and is a principal ingredient in cat litter.

Due to subsidence and rot caused by the damp conditions, most of the houses are uninhabitable and have been abandoned; they now lay deserted to rot.

Mills also sold properties at Choletria on the other side of the valley from Nata. Work on these never started and all that identifies ‘Laoni Hills’ is a rusting advertising board at the entrance to the site.

A couple who bought a property off-plan on this development became friends with Adrian Mills, even loaning him £20,000 to keep his company afloat; money that has never been returned – or the money they gave Mills to build their home.

The site at Choletria had planning permission for a single house, but Adrian Mills sold seven plots there for more than £600,000.

Before fleeing Cyprus Mills was summonsed to court several times for bouncing cheques. Eventually a warrant for his arrest was issued, but the police couldn’t find him.

Dominic tracked down Mills and invited him for an interview. You can watch the interview – it’s about 28 minutes into the video below.

You can also see the repairs that the Cowboy Builders team made to Tom and Irene’s home to help alleviate their problems. (As Tom and Irene do not have the Title Deeds to the property and are therefore not its owners, the repairs the team were able to make were limited).

The Channel 5 programme below runs for 43 minutes, but due to restrictions it may not be available at your location.

Some Land Registry employees believe they represent Saint Peter on earth said Auditor General Odysseas Michaelides at a meeting of the House ethics committee, deciding who will go to Heaven or Hell when it comes to property issues.
Read more
News