Property sales up 51 per cent in June 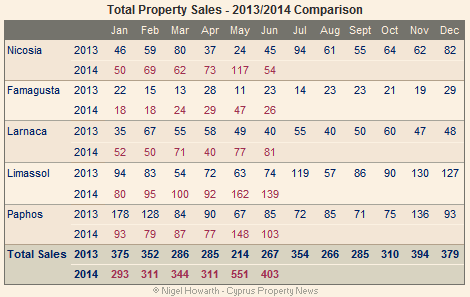 PROPERTY sales in Cyprus increased for the fourth consecutive month in June with sales increasing in all districts compared to June 2013.

During May a total of 403 contracts for the purchase of commercial and residential properties and plots of land were deposited at Land Registry offices across Cyprus; a 50.9% increase on the 267 contracts deposited during the same period last year.

Overall sales during the first half of this year have improved 34% compared to the first half of last. And although improvements have been seen in most districts, sales in Paphos have fallen 7%, but if the upward momentum continues they should soon recover.

We will publish a breakdown of the sales figures as soon as the Department of Lands and Surveys publishes the relevant data.