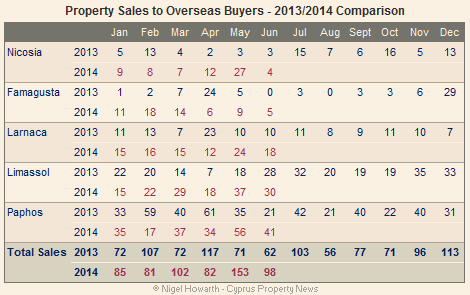 Earlier today, the Department of Lands and Surveys published a breakdown of property sales which show that, during June, sales to the domestic market and the overseas market both improved compared to the same period last year.

During June a total of 403 contracts for the sale of commercial and residential properties and plots of land were deposited at Land Registry offices across Cyprus; an increase of 157 per cent on the 267 contracts deposited during the same period last year.

With the exception of Famagusta and Paphos, where sales fell 9 per cent and 3 per cent respectively compared to last year, sales increased in all other districts.

Sales in Limassol increased 137 per cent, while those in Larnaca and Nicosia rose by 110 per cent and 19 per cent respectively. 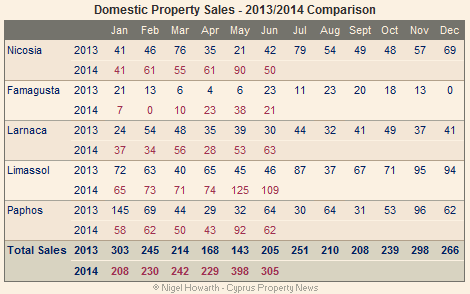 Property sales to the overseas market in June increased compared to June 2013, although not achieving the strong gains experienced during May.

Will Cyprus bounce back?

Property sales to the domestic market may be slowly returning following the ‘haircut’ on bank deposits last year although it seems unlikely that they will reach 4,793 achieved in 2012. Sales to the overseas market are also improving and annual sales in 2014 could better the 1,476 sold in 2012 if the momentum continues. 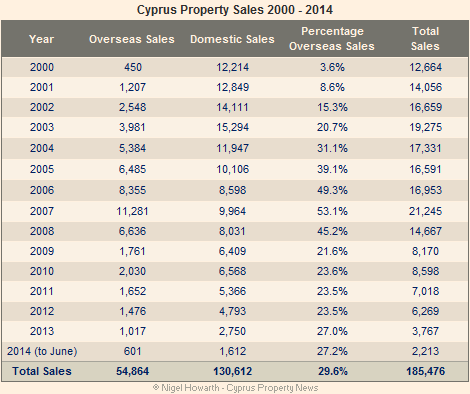