Let’s have coffee, reminisce and moan 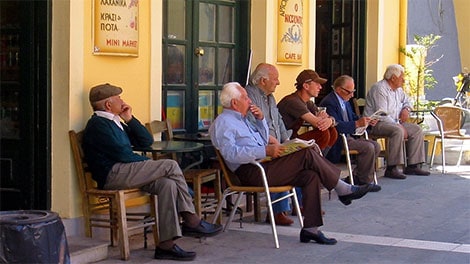 CYPRIOTS are increasingly finding themselves frustrated, marginalised and excluded from the decision making process of how their economy is run. With government policy dictated by the MoU, banks in the hands of overseas investors and the economy tangled in a state of deleveraging, Cyprus companies risk getting drowned in the storm waves.

July has been a particularly exciting month; the Troika carried out its quarterly review of the government’s progress on implementing the agreed Memorandum of Understanding (MoU), Bank of Cyprus secured €1.0bn of capital by issuing more shares, the Federal Bank of the Middle East (FBME) was accused of money laundering and its operations were taken over by the Central Bank of Cyprus, and the foreclosure process inched a step closer to being enacted. If a paragraph worth of ‘excitement’ isn’t enough, I don’t know what is.

At the end of all of this excitement Cyprus finds itself in an ‘interesting’ position.

The Troika had to crack the whip in order to get to an agreement with the government as to how the real estate foreclosure process will work (the law will go to Parliament in the next couple of days, where populist MPs will speak with vigour against the Troika and then vote for the law to pass – beggars can’t be choosers). Cyprus is no more the ‘Golden Child’.

Bank of Cyprus has gone from being a Cypriot-owned bank at the end of 2012, to it being a Russian-owned bank in March 2013 (due to the ‘haircut’ and the conversion of deposits to capital, 60% of shareholders of Bank of Cyprus were Russian nationals/companies). After the latest share issuance, it is now going to be a US controlled bank due to that the majority of the capital has come from US hedge funds. Thus, the two largest banks are now US controlled (US hedge fund Third Point owns 30% of Hellenic Bank) whilst the COOPs are 99% owned by the Cyprus Government (and will need to be sold at some point, probably to an overseas investor).

FBME was accused of money laundering by the US Treasury and its operations were swiftly taken over by the Cyprus Central Bank. The announcement was timed a couple of days before Bank of Cyprus’ share issuance,(which rattled investors, who offered somewhat lower prices). This development potentially comes at a great time for either Hellenic Bank or Bank of Cyprus, who could acquire FBME’s assets and strengthen their own asset base. If I were a conspiracy theorist I would say that by timing the announcement when it did, the US treasury secured a lower price for the hedge funds and simultaneously secured a way for them to bolster their investment by acquiring the FBME’s assets.

The above developments have caused many Cypriots (including the uber-populist Archbishop) to accuse the government of “selling them out”. As dramatic as the above reads I still find the delivery of a similar line in “On the Waterfront” far more convincing; Terry (Marlon Brando) reminds Charley that if it had not been for the fixing of the fight, “I coulda had class. I coulda been a contender. I coulda been somebody, instead of a bum, which is what I am, let’s face it. It was you, Charley”. Blaming everyone else for our own problems is a national sport.

So, where do we stand in the real estate market? The trough in terms of investor and buyer interest was in March, when there was heightened uncertainty around the economy and the banking sector. Prices still need to drop by an additional 10-15%, but this is almost irrelevant; the only way to get renewed market activity is to lower the unemployment rate and financial institutions to provide some debt for mortgages and investors. Neither of the above is likely to happen in the next couple of years as financial institutions are focused only on deleveraging. This means that transaction activity will remain at subdued levels, with buyers being overseas investors who don’t require debt finance (or are able to secure it from overseas) and cash buyers.

The question therefore is where do the opportunities lay? Is it targeting overseas investors looking to invest in the hotel industry? Specialising in the oil and gas sector and climbing on that bandwagon? Providing advisory services to foreign nationals looking at Cyprus’ nationalisation or visa program?

Cyprus is at the end of a creative destruction cycle and it’s time for businesses and individuals to reinvent themselves, looking at the opportunities that lay ahead rather than driving by looking at the rear-view mirror, reminiscing about how things were.