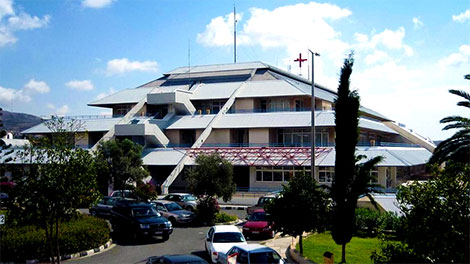 FOLLOWING an eight hour session at the Paphos District Court yesterday, the judge remanded all four defendants in a case involving alleged fraud in the division of a number of plots in Paphos pending a ruling today.

Theodoros Aristodemou, the founder and managing director of Aristo Developers and former Chairman of the Board of Directors of the Bank of Cyprus, spent last night in the Paphos General Hospital under police guard, while the other three defendants spent the night behind bars.

Following his arrest on Thursday, Aristodemou fell ill and was unable to attend the remand hearing yesterday. He was admitted to the Paphos General Hospital with high blood pressure where he remains in intensive care.

His doctors confirmed that he should remain in hospital; he has also waived his right to be present during today’s hearing.

The former chairman of the Bank of Cyprus, Aristodemou quit his post in August 2012 citing “serious health issues” in his letter of resignation. He assumed the chairmanship in May 2008 and had been a member of the board since 1991.

Prominent land developer Theodoros Aristodimou, his wife, and two others, have been remanded in custody for eight days in connection with zoning violations in Paphos.

Aristodimou is still in hospital where he was admitted on Friday with high blood pressure.

They were all arrested on Thursday in connection with the demarcation of 177 land plots in Skali.

Investigators are looking into whether Aristo Developers grabbed 2,750 square metres of land earmarked for green spaces and pavements, as well as looking into alleged forged documents relating to planning permission for the Skali area.

The owners of unlicensed communal swimming pools are facing court action following inspections carried out by the Paphos Municipality who insist that pools must be licenced, inspected daily and a lifeguard appointed.
Read more