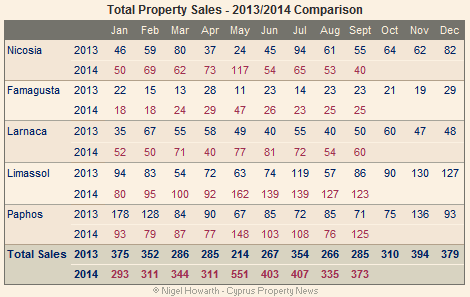 PROPERTY sales in Cyprus increased for the seventh consecutive month in September compared to the same period last year according to the latest figures from the Department of Lands and Surveys.

During September a total of 373 contracts for the purchase of ‘immovable property’ (i.e. commercial and residential properties and land) were deposited at Land Registry offices across Cyprus; a 31 per cent increase on the 285 contracts deposited in September last year.

With the exception of Nicosia, where the number of sales fell 27%, sales improved in all other districts compared to last year. Sales in Paphos increased by 76% and those in Limassol rose 76%; sales in Larnaca and Famagusta rose 20% and 9% respectively.

Speaking to Stockwatch the vice president of the Cyprus Real Estate Agents’ Association Solomon Kourouklides said “people expected that the foreclosures bill would be approved and many rushed to make sales to service their loans. These are exceptional sales made by developers and individuals under unusual circumstances” and added “There is a second type of sales as well; some are trying to take advantage of falling prices in the property market.”

Sales in Limassol are up 50% compared to last year, while sales in Famagusta are up 37%. Sales in Larnaca are up 24% and sales in Nicosia have risen 16%; although sales in Paphos are up, their numbers have increased by a mere 4.2%.

Although domestic sales in September rose by 28% compared to last year, this increase was due a 184% increase in Paphos and a 51% increase in Limassol. Sales in Famagusta declined 50%, while those in Nicosia and Larnaca fell 33% and 17% respectively over the nine month period. 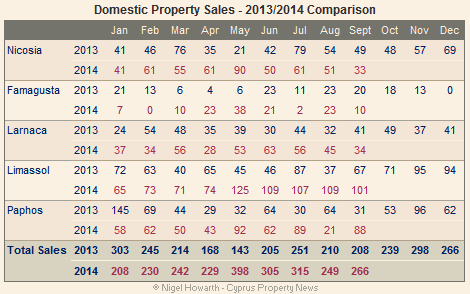 Sales in Limassol are up 60% compared to last year, while sales in Larnaca are up 17%. Sales in Nicosia are up 14% and sales in Paphos and Famagusta have risen 11% and 6% respectively.

Sales to the overseas market rose 31% in September compared to the same month last year. Sales increased in all districts with the exception of Paphos, once a British expatriate hot-spot, where the number fell to 37 from 40 last year; a drop of 8%. 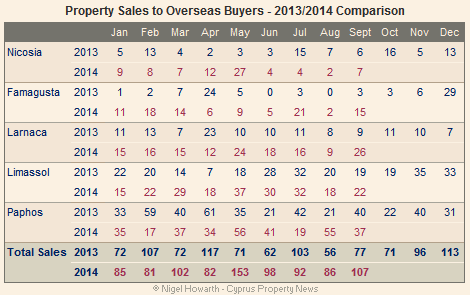 However, sales in Paphos have fallen to 331 during the first nine months of 2014 from 352 during the same period last year; a fall of 6%