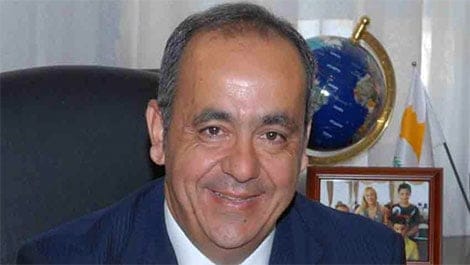 PAPHOS Mayor Savvas Vergas will appear in court on Thursday to hear charges of conspiracy to commit a crime, related to SMS messages sent from the mobile phone of a municipal worker to several people involved in a major property fraud case.

Vergas, too, was allegedly one of the recipients of the threatening text messages that were tracked down to the smartphone held by municipal marketing officer Maria Solomonidou, wife of a draftsman working at Aristo Developers, who is the centre piece of the whole scandal.

The smartphone was purchased by the mayor and ended up in his aides hands to help her with her workload, Vergas had said in earlier statements.

However, investigators triangulated the transmission of the text messages and believe that the mayor and Solomonidou were in the same location when the threats were sent out.

Aristo founder and former Bank of Cyprus Chairman Theodoros Aristodemou, as well as his architect wife Roulla, were released last week after being held in connection with a land zoning case involving a major development in the Strakka area of Paphos, where the company allegedly altered plans in order to gain usable land and make more money. Similar allegations have been put forward regarding the commercial use and parking lot allocation at the King’s Mall project in Kato Paphos.

Aristodemou claims he and his wife are innocent and that they are the victims of a vicious attack against his company.

Two Paphos municipal employees were also held during the investigations, for aiding in the alteration of the land zoning documents, with investigators finding amounts in their bank accounts that had been unaccounted for or unjustified.

Meanwhile, Maria Solomonidou is also embroiled in another case involving a concert given in summer by pop star Sakis Rouvas, as the company in which she appears to have an interest never paid the municipality the fees it had promised, according to complaints filed by another municipal councillor.

The Paphos district court remanded Savvas Vergas in custody for four days following a seven hour hearing. The police had requested an eight-day remand, but the court decided this was excessive.

The court said there was a ‘plausible link’ between Vergas and the charges levelled against him.

The owners of unlicensed communal swimming pools are facing court action following inspections carried out by the Paphos Municipality who insist that pools must be licenced, inspected daily and a lifeguard appointed.
Read more