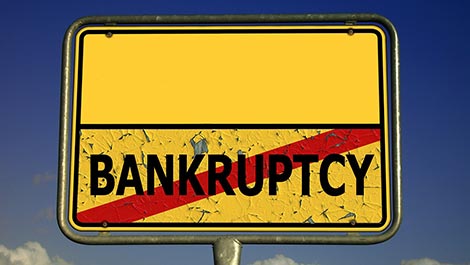 A REPEAT of the foreclosures’ debacle may be on the cards with the so-called insolvency framework, which according to the bailout agreement must be enacted by year’s end.

With the clock ticking, a visiting team of troika technocrats on Thursday discussed the new bankruptcy legislation with an inter-parliamentary team of ‘experts’ as well as with Central Bank and finance ministry officials.

Sources close to the talks said the discussion revolved around “an initial exploration and exchange of views” on bankruptcy-related legislation currently being fleshed out and which is tightly linked to soon-to-be-enforced repossessions proceedings.

During the meeting, party officials claimed that the Central Bank is not furnishing data on the impact of new bankruptcy laws on lenders, which made it impossible at this point to assess how much protection should be extended to mortgagors who have fallen on hard times.

As it stands, the bill governing personal insolvency contains only one eligibility condition, namely, that a borrower has lost 25 per cent of his or her income over the past two years. As yet there’s no mention of the outstanding debt amount or the value of the primary (mortgaged) residence to be exempted from repossession.

According to reports, the troika technocrats insisted that following any debt restructuring a bank cannot find itself in a worse financial position than it would in the event of a forced property sale. Party officials in turn countered that the auctioning off of properties en masse will inevitably drive down mortgage values.

Under the examinership bill, an examiner would be appointed to restructure the debt of corporations. The examiner will first determine whether a company is viable and then work with the directors in finding ways to keep the company a going concern so that it can gradually repay its loans.

Once a company is placed in examinership, no liquidation measures may be taken against it for a period of 120 days.

The bill governing administration deals with issues such as when floating charges on loans are transformed into fixed charges.

According to sources, the IMF technocrats are of the opinion that the provisions of the two bills contain a great deal of overlap, and propose that the examinership item prevail as it adequately covers both bills.

A proposal has also been floated for merging the two bills.

Per the terms of the bailout agreement, Cyprus must enact new insolvency laws by the end of the year. However achieving that time-objective is now looking increasingly unlikely.

So far, only three or four of the draft bills have been prepared. Once all the drafts are ready, they will need to be translated from English into Greek, and then forwarded to the Attorney-general’s office for legal vetting, which could take anywhere from one to two weeks. Next, the bills are sent to parliament for what is expected to be a long deliberation process, as parties are bound to introduce a host of amendments before the bills get to the plenum for a vote.

The chances of the bills reaching parliamentary committee by early December are slim to none. And in mid-December the plenum will be busy voting on the 2015 budget.

Meanwhile, the next meeting of eurozone finance ministers – known as the Eurogroup – is scheduled for December 2 or 3, where they are expected among others to give the nod to the disbursement of the next tranche of aid to Cyprus.

But AKEL and even EDEK could throw a spanner in the works should they table a legislative proposal to postpone enforcement of the foreclosures law, passage of which – without any strings attached – was a precondition for the release of the next tranche.

In a bid to protect mortgagors’ primary homes from repossession, the two parties insist the foreclosures legislation cannot be enforced unless a safety net for debtors – the insolvency framework – is in place.

Given that few sessions of the plenum remain until the end of the year, AKEL and EDEK may make their move soon, and certainly before the insolvency framework is ready.

Once again, a lot will depend on the stance of DIKO, since AKEL and EDEK will not proceed unless they have the former’s backing.

If a bill blocking enforcement of the foreclosures law is passed before the Eurogroup next meets, Cyprus’ international creditors may again withhold release of the pending aid tranche.

“Let’s hope we avoid a Round 2 of the foreclosures saga,” a source from the ruling DISY party said.

Representatives from the troika of Cyprus' international lenders, the IMF, EC and the ECB, have been in Cyprus since Monday conducting a fourth post-programme review, which they are expected to complete next Friday.
Read more
News

Representatives of the troika of international lenders plus the European Stability Mechanism (ESM), the IMF, EC and the ECB , will be in Cyprus later this month for the third post-programme surveillance.
Read more