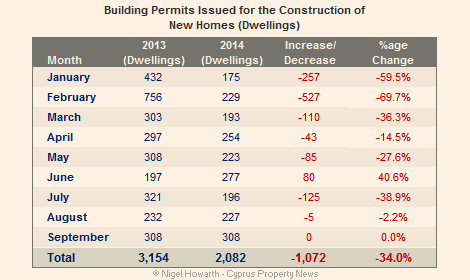 The 286 residential building permits authorised in September provided for the construction of 308 dwelling units comprising 144 single houses and 164 multiple housing units (such as apartments, semis, townhouses and other residential complexes).

During the first nine months of 2014, a total of 3,714 building permits were authorised; a fall of 7% compared to the 3,993 permits authorised during the same period last year. The total value of these permits has fallen by 26%, while their total area has fallen 27%.