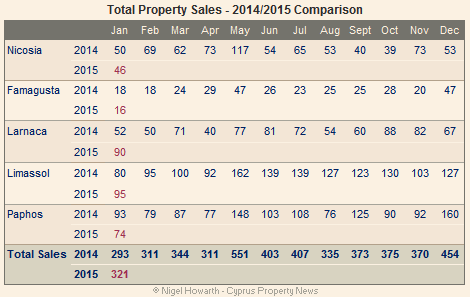 PROPERTY sales in Cyprus rose 10% in January compared with January 2014, but although sales increased in Larnaca and Limassol, they fell in the other districts.

During January a total of 321 contracts for the purchase of commercial and residential properties and land were deposited at Land Registry offices across Cyprus; a 10% increase on the 293 contracts deposited during January 2014.

In percentage terms, Larnaca performed best achieving 90 sales; an increase of 73% compared to the 52 sold during the same period last year, while sales in Limassol rose 19% to reach 95 compared to the 80 sold in January 2014.

However, sales in Paphos, Famagusta and Nicosia fell by 20%, 11% and 8% respectively.

A recent article in Stockwatch referred to what it called a “slow correction in property prices” that troubles foreign investors, many of whom believe that property prices do not reflect the economic conditions.

It considers that investors believe that the vast over-supply in the property market will continue to push prices down in the coming years, especially after the vote of regulations for foreclosures and insolvency.