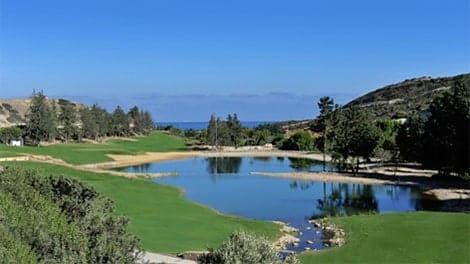 A HANDFUL of prospective buyers are believed to have shown keen interest to invest in the Venus Rock project, the biggest integrated beachfront resort already underway on the island with a market value of €5.7 billion, with on-site visits that followed last week’s successful Cyprus Investors’ Summit held in Limassol.

The project, under the wings of Aristo Developers, the property company 49%-owned by AIM-listed Dolphin Capital, turned out to be the star attraction at the Summit, organised by the Cyprus Investment Promotion Agency. The aim was to bring major institutional investors in contact with managers of local projects, including the Cyprus Limni Resorts & Golf Courses Plc, developer of the €1.5 billion hotel and golf resort project near Polis Chrysochous, as well as the upcoming privatisation of state companies and sale of government-owned assets.

“Of the 34 major investors and fund managers who attended the Summit, nearly half showed keen interest primarily in Venus Rock and also other investments, engaging in one-to-one presentations, while seven of those arranged for on-site visits,” Aristo Head of Marketing, Marios Pavlou, told the Financial Mirror on the sidelines of the Limassol event.

Ever since the €350 mln deal arranged by Dolphin Capital Investors with China Glory Investment Group fell through, there has been steady interest in Venus Rock, because it is a mature project and includes plots that are ready for delivery, Pavlou explained.

“While the real estate market was impacted by the financial crisis that hit Cyprus during 2012-2013, this has been less pronounced in prestigious golf resorts and beachfront projects,” he said.

Pavlou added that about 400 plots and 400 villas have already been sold, 300 villas have been built so far and a further 250 plots are available in the present phase.

“Don’t forget that the project incorporates the 18-hole Secret Valley golf course, which is a ready-made project for any investor.

“It’s a matter of time for the right investor to come forward. As a general investor rule, Cyprus is at the bottom line of its economy curve and it is best regarded as a buyer’s market,” Pavlou said.

Some of the features of the project incorporate Cypriot and eastern architecture, which makes it very attractive to Asian buyers.

The long list of associates includes EDSA Landscape Architecture (US), Porphyrios Associates (UK), Robert AM Stern Architects (US), Geoffrey Mouen Architects (US), UDS Architects (Cyprus), Gasterelia Design of Lebanon (developers of the Nikki Beach hotel, club and villa concepts), and Tony Jacklin championship golf course (US), all of which are attractive features and contributors for potential buyers.

At 10 million sq.m. of land, and a capacity to build up to 5,000 units, Venus Rock’s managers are expected to proceed with some sort of deal within 2015 that will inject much-needed cash into the economy and allow for the construction industry to pick up again.

The project’s marina is the only pending issue with the authorities, while the inclusion of the Nikki Beach Hotel concept has also created interest from investors.