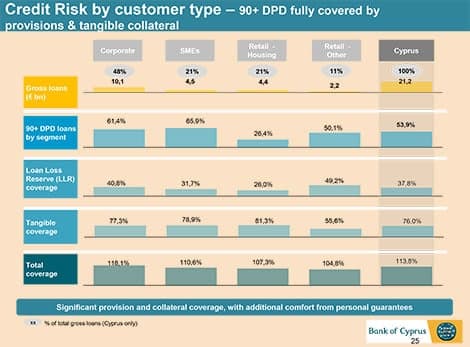 According to the bank’s preliminary results, housing loans are its best performing category of loans as regards the level of non-performing loans.

At the end of last year housing loans totalled €4.4 billion accounting for 21% of the bank’s total loans in Cyprus, which amounted to €21.2 billion.

Non-performing loans in Cyprus for the other categories reported by the bank are considerably higher:

The CEO of the Bank of Cyprus has said on numerous occasions that the bank would not pursue mass foreclosures on vulnerable members of society.

On Thursday, opposition parties once again voted to delay the suspension of the foreclosures legislation; this time until 19th March. However this time saying that the suspension was to allow them time to study and pass the five bills comprising the insolvency framework, which is seen as a safety net for distressed borrowers who have pledged their homes and businesses as collateral.