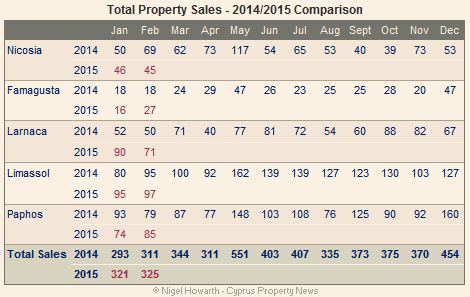 PROPERTY sales in Cyprus rose 5 per cent in February compared to the number sold in the same period last year following a 10 per cent increase in January.

During February a total of 325 contracts for the purchase of commercial and residential properties and land were deposited at Land Registry offices across Cyprus, up from 311 contracts deposited in February 2014.

Speaking to Stockwatch Solomon Kourouklides, the vice president of the Pancyprian Association of Real Estate Agents, said that he expects the increase in sales to continue in the months ahead.

Although sales fell in Nicosia by 35%, they increased in all the other districts.

In percentage terms, Famagusta performed best achieving 27 sales; an increase of 50% compared to the 18 sold during the same period last year and sales in Larnaca rose 42% to reach 71 compared with the 50 sold in February 2014.

Meanwhile, property sales in Paphos rose 8%, while those in Limassol rose 2%.

However, the number of contracts deposited in Nicosia and Paphos fell 24% and 8% respectively.