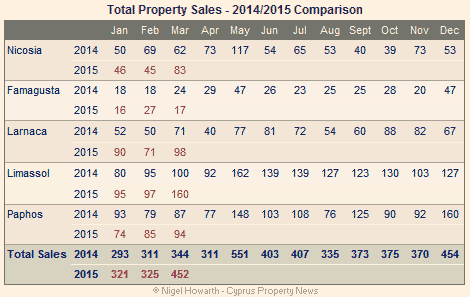 THE NUMBER of properties sold in Cyprus in March increased 31 per cent compared with March 2014 with sales improving in all districts with the exception of Famagusta.

In March a total of 452 contracts for the sale of commercial and residential properties and plots of land were deposited at Land Registry offices across Cyprus; an increase of 31% on the 344 contracts deposited during the same period last year.

Although sales fell 29% in Famagusta, they increased in all the other districts.

Domestic sales in March increased by 70% compared with the same month last year, rising to 411 from 242.

Sales increased in all districts lead by Limassol, where the number of properties sold increased 107% to reach 147 compared to the 71 sold in March last year. Sales in Paphos increased 72%, sales in Larnaca rose 63%, while sales in Famagusta and Nicosia rose 60% and 29% respectively. 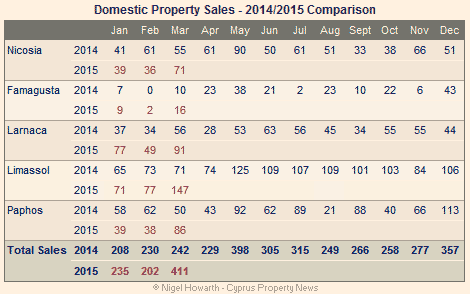 With reports of Lebanese buyers being duped, the devaluation of the rouble and reports of Chinese buyers being ripped-off appearing in the Greek-language media, it isn’t surprising that overseas sales bombed in March with sales falling 60% compared to March last year

With the exception of Nicosia, where sales improved 71%, sales fell in all the other districts.

Sales in Famagusta fell 93% with just one property sold compared to the 14 sold in March 2014. Sales in Paphos were down 78%, while sales in Limassol and Larnaca fell 55% and 53% respectively. 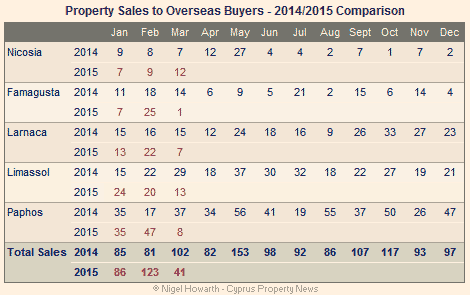