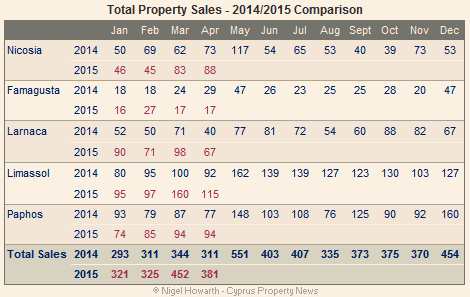 THE NUMBER of properties sold in Cyprus during April increased 23 per cent compared with April 2014 with sales improving in all districts with the exception of Famagusta.

Industry pundits consider that sales will continue to increase while the banks put pressure on delinquent borrowers to repay their loans.

Speaking to StockWatch Solomon Kourouklides, the Vice Chairman of the Cyprus Real Estate Agents Association (CREAA), said that the foreclosures law is putting pressure on people sell their property to repay their loans.

He said “Prices are being pushed downwards and people with liquidity are taking advantage of the situation to buy property.”

“When they receive letters from banks and lawyers people panic and rush to sell their property.

“People, unfortunately, are not aware of their rights in the foreclosures process and the partial protection granted to borrowers and guarantors under the new framework for insolvency.”

Commenting on the effect on the market of lower interest rates Mr Kourouklides noted that “the decline is slight and does not contribute to the increase in demand.”

In April a total of 381 contracts for the sale of commercial and residential properties and plots of land were deposited at Land Registry offices across Cyprus, compared with the 311 contracts deposited during the same period last year.

Although sales fell 41% in Famagusta in April, they increased in all the other districts.

Domestic sales in April increased 24% compared with the same month last year, rising from 229 to 284.

With the exception of Famagusta, where the number of sales fell 30% compared to last year, their number increased in all the other districts.

Paphos saw the largest increase, with sales increasing 49% to reach 64 compared with the 63 sold during April last year. Sales in Larnaca went up 43%, while those in Limassol and Nicosia rose by 22% and 21% respectively. 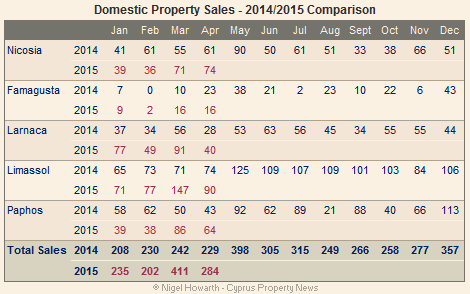 Following a disastrous 60% drop in overseas sales during March, sales during April were much more encouraging, with sales up 18% compared with April 2014.

With the exception of Famagusta and Paphos, where the number of sales fell 83% and 12% respectively, they improved in the three remaining districts. 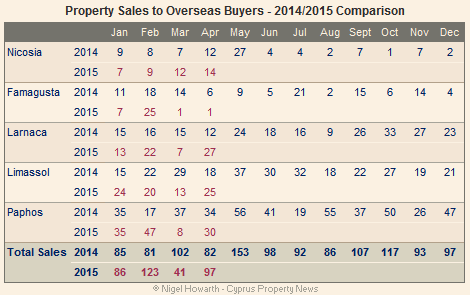 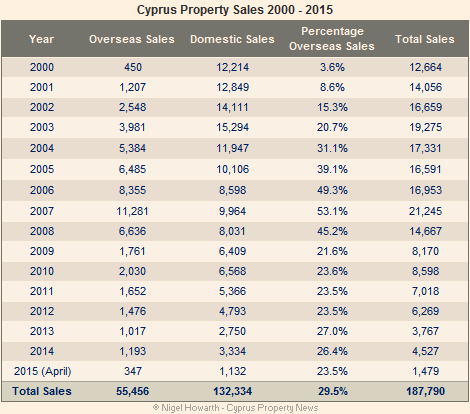