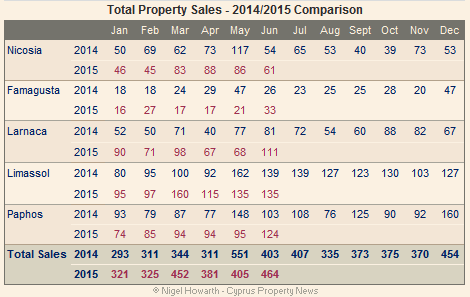 THE NUMBER of properties sold in Cyprus during June increased 15 per cent compared with June 2014 with sales improving in all districts with the exception of Limassol.

Industry pundits anticipate that the recent announcements by the government to resolve the ‘hidden mortgage’ problem and reduce Property Transfer Fees by 50 per cent will help boost the market. (Further announcements concerning a planning amnesty are anticipated.)

In June a total of 464 contracts for the sale of commercial and residential properties and plots of land were deposited at Land Registry offices across Cyprus, compared with the 403 contracts deposited in June last year.

Although sales fell 3% in Limassol, they increased in all the other districts. Sales in Larnaca rose 37% to reach 111 compared to the 81 sold in June 2014. Sales in Famagusta went up 27%, while those in Paphos & Nicosia increased by 20% and 13% respectively.

Although sales in Limassol fell in June it remains the most popular place for those buying property, with half-year sales reaching 737. Paphos is in second place with 566 sales, followed by Larnaca (505), Nicosia (409) and finally Famagusta (131).

Although sales in Limassol fell 8%, they increased in all the other districts.

Following last month’s fall in Famagusta sales in June increased 43% compared to June last year. Sales in Larnaca rose 30%, while those in Nicosia and Paphos rose 16% and 2% respectively. 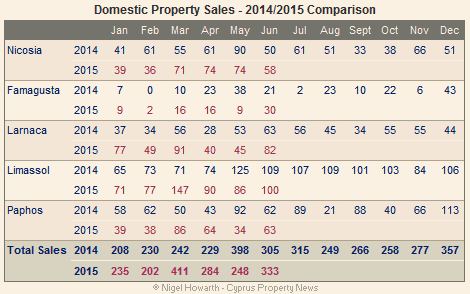 During the first half of 2015, property sales to the domestic market have increased 6% compared with the same period last year having risen to 1,713 from 1,612.

Sales to the overseas market in June rose 6% compared with June 2014.

Although sales in Famagusta and Nicosia fell by 40% and 25% respectively, they increased in the other three districts.

Sales in Larnaca rose 60%, while those in Paphos and Limassol rose 49% and 17% respectively. 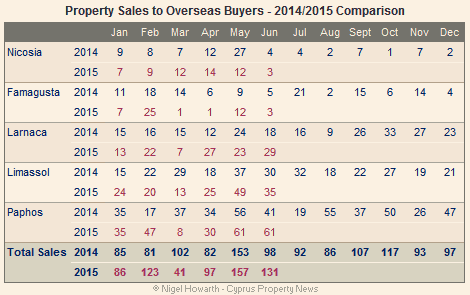 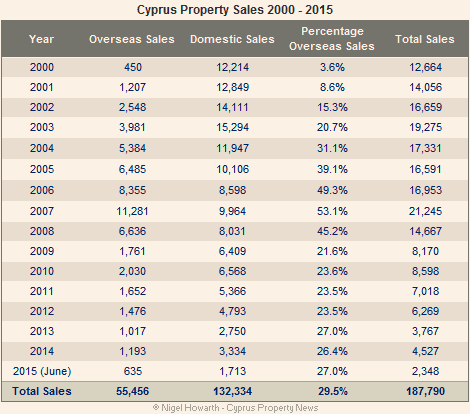