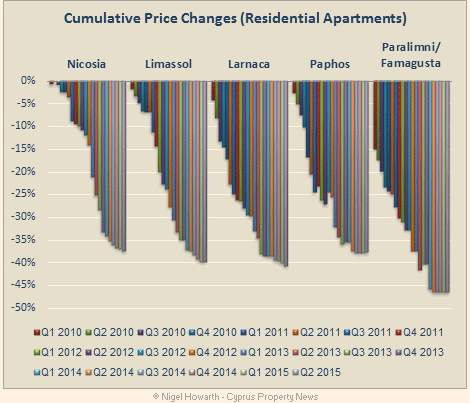 Elsewhere apartment prices in Nicosia fell by 1% over the quarter, in Paphos they rose by 0.1%, while they remained steady in Limassol and Paralimni/Famagusta.

House prices in Paphos rose 0.6% and remained steady in Limassol and Paralimni/Famagusta.

The parallel reduction in capital values and rents is keeping investment yields relatively stable and at low levels (compared to yields overseas). This suggests that there is still room for some re-pricing of capital values to take place, especially for properties in secondary locations.

Speaking to Stockwatch, Charalambos Petrides MRICS, said that: “The downward trend in real estate prices continued on an annual basis. It is interesting that in the first and second quarters of 2015 for the municipality of Paphos and Famagusta the drop in prices has stopped thus annual losses have been reduced.

“What is positive in the first quarter of 2015, compared to 2014 and 2013, is the increased marketability, by about 20% annually. It seems that property transactions have rebounded and price reductions restore market activity.

“With regard to real estate prices, the downward trend is expected to continue on an annual basis in 2015 perhaps with smaller losses compared to 2014. In anticipation of developments in the banking sector, particularly as regards to non-performing loans, the strict lending policy market, the high interest rates and the foreclosures, the property market is in a downtrend.

“The legislation on foreclosures that has passed by parliament is a positive development and is expected to have a positive impact on non-performing loans and real estate over the longer term”. 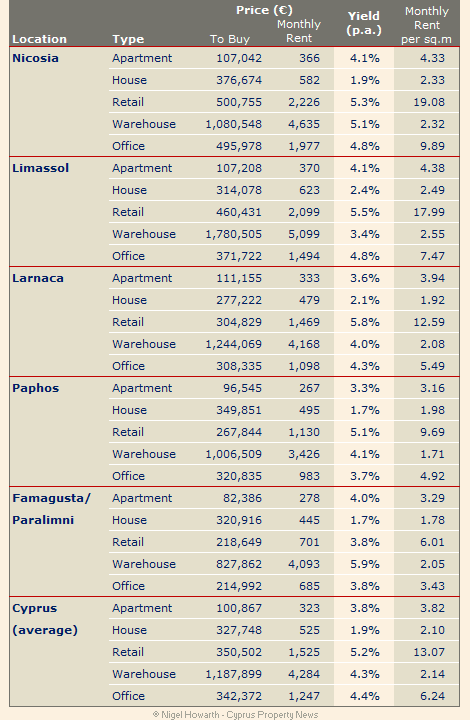 Prepared by RICS Cyprus in conjunction with the Cyprus Association of Quantity Surveyors (SEEOKK) and the Cyprus Valuers Association (SEEAK), the quarterly RICS index monitors property prices and rents in all districts using a methodology developed by Reading University in the UK.

Since the first RICS Cyprus Property Price Index was published for the first quarter of 2010 residential house prices have fallen by an average of 29.7%, while those of apartments have fallen 40.3%. 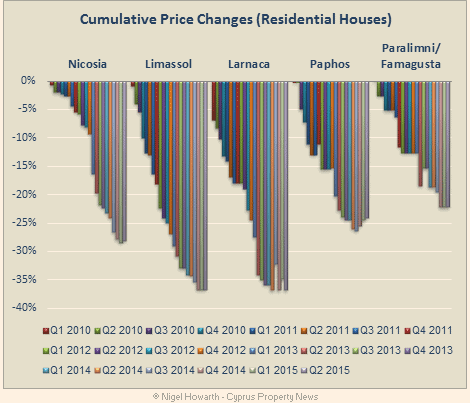 (Note that the RICS Price Index does not include prices of holiday homes and all properties used to construct the index have clean Title Deeds.)