Cyprus property sales up 23 per cent 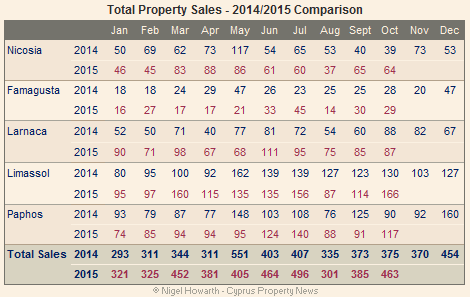 THE NUMBER of properties sold in Cyprus during October 2015 increased according to the latest official statistics issued by the island’s Department of Lands and Surveys.

During October a total of 463 contracts for the sale of commercial and residential properties and land (building plots and fields) were deposited at Land Registry offices across Cyprus, compared with the 375 deposited in October 2014; an increase of 23 per cent.

With the exception of Larnaca, where sales fell by 1%, sales rose in all the other districts. Sales in Nicosia (the island’s capital) rose 64%, while sales in Paphos went up 30%. Sales in Limassol and Famagusta rose by 28% and 4% respectively.

It appears that Cypriots in particular are returning to the market following the introduction of legislation reducing Property Transfer Fees and issuing Title Deeds to ‘trapped buyers’ (the hidden mortgage law) – and the introduction of a building amnesty allowing building coefficients to be increased by 20 per cent or 60 square metres without penalty.

Property sales to the domestic (Cypriot) market in October rose 36% compared to October 2014, with sales reaching 352 compared with 258 in October last year.

Sales rose in all districts with Paphos leading the way with sales up 105%. Sales in Nicosia rose 58% and those in Limassol rose 23%, while property sales in Famagusta and Larnaca rose by 9% and 7% respectively. 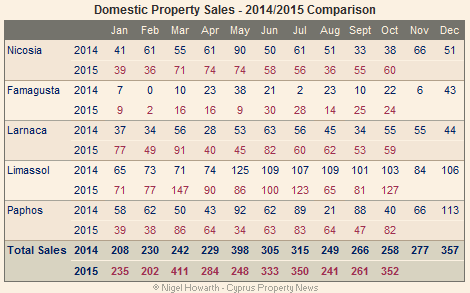 In contrast with domestic sales, property sales to the overseas (non-Cypriot) market fell 5% in October compared with October 2014 with 111 properties being sold compared with the 117 sold during October 2014.

It appears that Cyprus has some way to go before it can regain the confidence and trust of foreign investors. 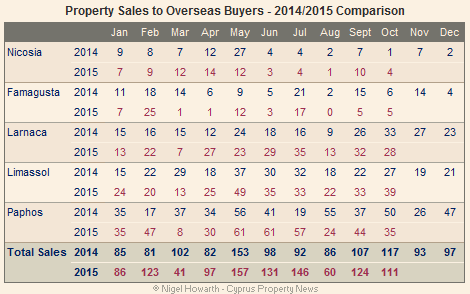 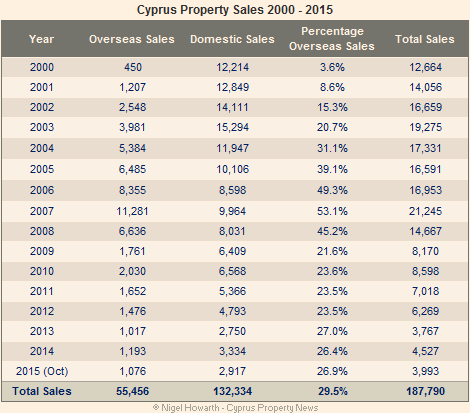